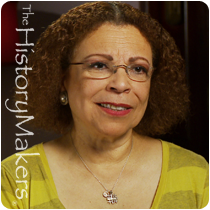 See how Karen DeWitt is related to other HistoryMakers

Newspaper journalist and communications executive Karen DeWitt was born in Washington, Pennsylvania on April 18, 1944. DeWitt graduated from Miami University with her B.A. degree in english and philosophy. From 1966 to 1968, she enrolled in the U.S. Peace Corps. DeWitt began her journalism career in 1977 when she was hired by the Washington Post as a staff writer for its style section. That same year, the New York Times hired DeWitt as its national correspondent for its Washington D.C. bureau, where she served until 1981. In 1982, she was hired as a columnist for USA Today. While at USA Today DeWitt served as a foreign correspondent, White House correspondent and national editor. After six years, she was rehired as the national correspondent for the Washington Post. Then in 1997, DeWitt was hired as a senior producer for the critically acclaimed ABC News television magazine Nightline. After four years with ABC News, in 2001, she launched her own media and communications consultation company.

In 2003, DeWitt served as the communications consultant for several municipalities and non-profits, like the Washington D.C. Water and Sewer authority. She also served as editor and columnist for the Washington Examiner a year after being named director of communications for The Leadership Conference on Civil and Human Rights, a civil and human rights coalition. In 2011, DeWitt was named communications manager for the prisoners’ rights advocacy group The Sentencing Project.

Throughout her career, DeWitt has amassed notable honors, including a 1999 award for best feature from the New York Association of Black Journalists for coordinating a Nightline show that featured the recorded recollections of former slaves. DeWitt also garnered a journalism award from the University of the District of Columbia and a research fellowship from the Japan Society.

See how Karen DeWitt is related to other HistoryMakers
Click Here To Explore The Archive Today!