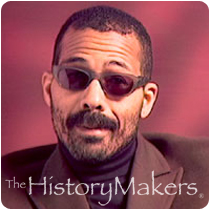 See how Kahil El'Zabar is related to other HistoryMakers
Donate Now

Musician Kahil El'Zabar was born in Chicago, on November 11, 1953. One of three children growing up in a South Side neighborhood, El'Zabar fell in love with the myriad sounds of the city, from doo-wop to jazz. After attending Catholic schools in Chicago, El'Zabar went to Kennedy-King College and later to Malcolm X and Lake Forest colleges. In 1973, he traveled to Africa to attend the University of Ghana and study African music firsthand.

El'Zabar began studying African music at an early age, taking a special interest in drumming. At the age of eighteen, he joined Chicago's Association for the Advancement of Creative Musicians, and by 1975 he was chairman of the organization. During the early 1970s, El'Zabar also formed his own musical group, the Ethnic Heritage Ensemble, and later another group, Ritual Trio, with which he still performs. His musical abilities have allowed him to play with such greats at Stevie Wonder, Paul Simon and Nina Simone, and he has toured the world with both his own groups and others. El'Zabar is active in more than just music, however. He has appeared in several films, including Mo' Money, How U Like Me Now and The Last Set. From 1996 to 1999, El'Zabar organized Traffic at Chicago's Steppenwolf Theatre, an inter-arts program featuring music and poetry.

El'Zabar has also served as an associate professor at the University of Nebraska at Lincoln and the University of Illinois at Chicago. He has published a book, Mis'taken Brilliance, and tailors clothing both for his band and for others. He is active on the boards of several organizations, including serving as the chairman of The Sun Drummer, an African American drum society, and on the board of directors of the National Campaign for Freedom of Expression. El'Zabar lives in Chicago. He has six children.

See how Kahil El'Zabar is related to other HistoryMakers
Donate Now
Click Here To Explore The Archive Today!