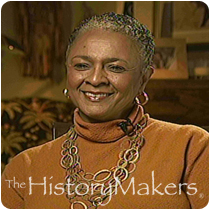 Favorite Color:
Red
Favorite Food:
Grits
Favorite Time of Year:
Fall
Favorite Vacation Spot:
Italy
Favorite Quote:
If It Is Going To Be, It Is Up To Me.

Favorite Color:
Red
Favorite Food:
Grits
Favorite Time of Year:
Fall
Favorite Vacation Spot:
Italy
Favorite Quote:
If It Is Going To Be, It Is Up To Me.

See how June M. Perry is related to other HistoryMakers

Perry and fellow social worker Geri McFadden started New Concept Development Center, Inc., in 1975 to address what they saw as a lack of local social services, specifically those for African Americans. New Concept is a non-profit social services agency that targets African Americans. Services include family counseling, housing, and employment assistance, as well as case management for HIV patients. In the 1980s, New Concept expanded into a greater set of social services by starting a mentoring program for girls at the Hillside Housing Project, providing a Youth Motivation Seminar for Role Models and Youth, and developing its first youth-managed and operated business through its youth entrepreneurship program. In 1986, New Concept authored a Blue Ribbon report on Teen Pregnancy Prevention for the City of Milwaukee. New Concept developed the first Prenatal Care Program which soon became the model for Title XIX benefits. In the 1990s, New Concept Development Center again expanded its services by opening Milwaukee’s first Father’s Resource Center and developing a First-time Juvenile Offenders Program which became a model for Milwaukee County. What began as a two-woman operation has grown into a 50-employee business serving more than 7,000 families a year operating a budget of $2.5 million. After retiring from New Concept Development Center in 2006, Perry created Access 2 Success, an organization which acts as a technical assistance intermediary between business, government and non-profits to expand the capacity for non-profit sustainability and strategic planning.

Perry is the recipient of many awards including the Sacajawea Trailblazer Award, the Woman of Influence Award, Mentor of the Year, the Black Women’s Network Lifetime Leader Award, the Kraft Foods - Essence Award, the Black Administrators in Child Welfare Long Term Leaders Award, and the Community Service Award from SET Ministries. Perry’s current volunteer involvement includes being a founding member of the African American Women’s Fund, membership on the board of directors of the Aurora Health Care Metro Region, and the oversight and advisory committee for the Healthier Wisconsin Partnership for the University of Wisconsin School of Public Health. Perry is also an independent travel agent for Keystone Travel. She has recently traveled to Australia, New Zealand, Greece, Turkey, France, Italy, and Mexico.

Sponsored by John and Irma Daniels and the Fellowship Open

See how June M. Perry is related to other HistoryMakers
Click Here To Explore The Archive Today!