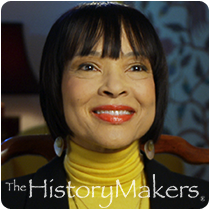 See how June Baldwin is related to other HistoryMakers
Donate Now

Entertainment executive June M. Baldwin graduated from Stanford University with her B.A. degree in psychology. She went on to receive her J.D. degree from Harvard Law School in 1975.

Following graduation, Baldwin served as clerk for the jurist Luther Swygert on the 7th Circuit Court of Appeals in Chicago, Illinois. She then moved to Los Angeles and was hired as an executive for NBC, where she was responsible for, among other things, the day-to-day business transactions for The Tonight Show and Carson Productions, the television and motion picture production company founded by the late talk show host, Johnny Carson. At NBC, Baldwin became one of the first African Americans to enter the executive ranks of the entertainment industry. She then worked for Norman Lear, Quincy Jones and Aaron Spelling, where she held the position of head of business affairs at their independent production companies.

Baldwin went on to be hired as vice president of business affairs at United Paramount Network. She also worked in a similar capacity at Columbia TriStar Television from 2000 until 2001. In 2004, Baldwin was hired as director of business and legal affairs at KCET, the nation’s largest independent public television station. Then, in 2010, she was promoted to vice president and general counsel of KCET. Baldwin has negotiated a variety of production deals, and has worked on such critically acclaimed productions as Auschwitz: Inside the Nazi State, A Place of Our Own, Los Ninos En Su Casa, Wired Science, and SoCal Connected.  In addition, for seven years she managed business and legal affairs for the PBS late-night talk show Tavis Smiley, and the primetime series Tavis Smiley Reports.

June M. Baldwin was interviewed by The HistoryMakers on November 18, 2013.

See how June Baldwin is related to other HistoryMakers
Donate Now
Click Here To Explore The Archive Today!