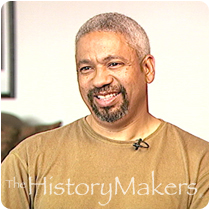 See how Jun Mhoon is related to other HistoryMakers
Donate Now

Music producer Jun Mhoon was born on June 10, 1954, and grew up on Chicago’s West Side. As a child, Mhoon stuttered, but he overcame that obstacle. While attending Grant Elementary School, Mhoon joined the drum and bugle corps, and found a mentor in Ms. “Satch” Finch.

In 1968, at the age of twelve, Mhoon had his first major breakthrough in the entertainment industry, when he became the first drummer to begin touring with the Staple Singers. Over the next ten years, Mhoon would tour and perform with many other notable artists, including trumpeter Thad Jones, Jessy Dixon and Paul Simon, and he was the first drummer to sit in with the Count Basie Orchestra. Hoping to learn more about the music industry, Mhoon took a job as a warehouse clerk at Warner Brothers Records, and quickly rose to director of Midwest Local Marketing. From there, Mhoon joined RCA Records as their Midwest regional director, and he enrolled at Columbia College in Chicago. While a student at Columbia, Mhoon founded AEMMP Records, Columbia’s student-run record label. After earning his bachelor’s degree, Mhoon became vice president of A&M Records.

In 1987, Mhoon struck out on his own, creating I AM Records, which specializes in hip hop, jazz, gospel and inspirational music, as well as spoken word albums. Recently, the label has changed its name to I AM Music, and Mhoon has forged ahead into the digital word through contracts to supply digital music to Apple’s iTunes, Napster, Rhapsody Digital Music and RealNetworks.

In addition to his work both as a musician and a recording executive, Mhoon has been involved in television, serving as the first African American to produce a TV dance show in Chicago, Steppin’ at Club 7. He also serves as an adjunct professor at Harold Washington College and Columbia College, both in Chicago.

See how Jun Mhoon is related to other HistoryMakers
Donate Now
Click Here To Explore The Archive Today!