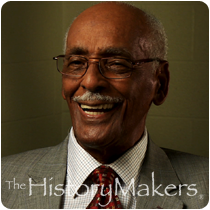 See how Julius Taylor is related to other HistoryMakers

Physicist and physics professor Julius Henry Taylor was born on February 15, 1914, in Cape May, New Jersey, to Julia and Coleman Taylor. Taylor was one of six children including Morris, Margaret, Coleman, Elizabeth, and Mildred. He attended Middle Township High School in New Jersey, where he played trumpet in the band and was an avid basketball player and track star. He graduated in 1932, and did not plan to attend college until he met his wife, Patricia Spaulding, who encouraged him to do so and the two married in 1937. The following year, Taylor earned his A.B. degree in physics from Lincoln University. He went on to receive his M.S. and Ph.D. degrees in solid state physics from the University of Pennsylvania.

In the 1940s, Taylor published scholarly papers while under contract with the U.S. Navy. In 1945, he became chairman of the Department of Physics at West Virginia State College. Four years later, he joined the faculty at Morgan State University at the insistence of then-president Dr. Martin David Jenkins. Taylor began building the physics department and became its first chairperson in 1954, after earning tenure as a professor. Taylor also started the first golf team at Morgan State University that went on to win the CIAA championship. A well-known golfer, Taylor continued to play 18 holes through 2009. During his years as a professor, Taylor mentored several students at Morgan State University who went on to get their Ph.Ds in physics including Dr. Frederick Oliver who would later be hired as chair of the Physics Department. In 1955, Taylor served as an editor for The Negro In Science, a book addressing prominent African American scientists and their research. During his time at Morgan State University, Taylor served as a liaison to the Goddard Space Flight Center and the National Science Foundation, along with several other scientific societies and committees. He also lectured at American University before his retirement in 1986 when he became professor emeritus at Morgan State. After his retirement, Taylor continued to mentor students in junior and senior high schools in the Baltimore Public School System. In 1998, Taylor served as a contractor to NASA.

Taylor is the recipient of two Honorary Doctorate degrees in Science from Grambling State University and Lincoln University. In 1963, he was named Alumnus of the Year by Lincoln University and in 1976, he received a Distinguished Service Citation from the American Association of Physics Teachers. He has been a member and president of the executive committee of the Chesapeake Section of the American Association of Physics Teachers as well as a section representative.

Julius Henry Taylor was interviewed by The HistoryMakers on July 13, 2010.

See how Julius Taylor is related to other HistoryMakers
Click Here To Explore The Archive Today!