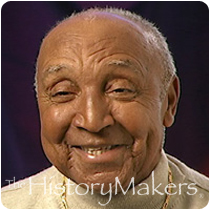 Favorite Color:
Brown
Favorite Food:
Peanuts, Okra
Favorite Time of Year:
Spring
Favorite Vacation Spot:
Florida
Favorite Quote:
I can do anything I make up my mind to do.

Favorite Color:
Brown
Favorite Food:
Peanuts, Okra
Favorite Time of Year:
Spring
Favorite Vacation Spot:
Florida
Favorite Quote:
I can do anything I make up my mind to do.

See how Julius Richardson is related to other HistoryMakers

Golf professional Julius Richardson was born on March 3, 1921. His interest in golf began when he came home to Blythedale, Pennsylvania, on leave from the famed 10th Calvary, better known as the Buffalo Soldiers. A friend who used to caddy convinced Richardson to join him in a game of golf. Richardson was intrigued by the complexity of the game. He started taking lessons and quickly became an accomplished player, winning nearly forty titles.

Richardson served in the U.S. Army for twenty years and taught golf for the last five. In 1960, he retired as a staff sergeant. Richardson wanted to play golf professionally after leaving the service. However, African Americans could play in the Professional Golf Association only if they had an apprenticeship at that time. Instead, Richardson worked at the Aerospace Guidance Center in Newark, Ohio, as a quality assurance inspector and then in the laser laboratory. After fifteen years, Richardson became an agent with Metropolitan Life Insurance Company, where he worked for ten years. At the age of sixty-five, Richardson retired and began teaching golf full-time.

Richardson has received numerous awards for his work as a golf instructor. In 1995, the United States Golf Teachers Association recognized him for his Lifetime of Excellence in the Golf Teaching Profession. Golf Magazine recognized Richardson as one of the top 100 golf teachers, and in 2000, he was named the U.S. Golf Teachers Federation’s Teaching Professional of the 20th Century. Richardson taught golf at Willow Glenn and the Great Lakes Naval Base in Chicago.

See how Julius Richardson is related to other HistoryMakers
Click Here To Explore The Archive Today!