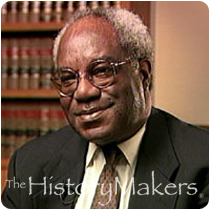 See how Julius Chambers is related to other HistoryMakers

Born in Mount Gilead, North Carolina, in 1936, veteran civil rights lawyer, activist and educator Julius L. Chambers was influenced by the racial intolerance he saw growing up in a rural community east of Charlotte. After graduating from high school in 1954, he entered North Carolina Central University, where he graduated summa cum laude with a B.A. in history and was president of the student body. He then attended the University of Michigan, earning an M.A. in history. Chambers began law school at the University of North Carolina at Chapel Hill in 1959, where he became the first African American editor-in-chief of the school’s law review. Upon graduating in 1962, Chambers ranked first in his class of 100 students. He went on to earn his LL.M. from Columbia University Law School in 1964.

Chambers became the first intern with the new NAACP Legal Defense and Education Fund (LDF) in 1963. Subsequently, in June 1964, he opened his own practice in Charlotte, which eventually became the first integrated law firm in North Carolina. Together with his founding partners, James E. Ferguson II and Adam Stein, this firm is credited with influencing more landmark state and federal legislation in school desegregation, employment and voting rights than any other in the United States. Together with lawyers of the LDF, they helped shape civil rights law by winning benchmark United States Supreme Court rulings such as the famous decision of Swann v. Charlotte-Mecklenburg Board of Education (1971), which led to federally mandated busing, helping integrate public schools across the country. Chambers and his team also won in two of the Supreme Court’s most monumental Title VII employment discrimination decisions, Griggs v. Duke Power Co. (1971) and Albemarle Paper Co. v. Moody (1974).

In 1984, Chambers left his firm to become director-counsel of the LDF. Under Chambers' leadership, the organization fought for civil rights legislation and affirmative action programs that began in the 1970s and 1980s. Remaining devoted to education, however, he returned to his alma mater, North Carolina Central University, where he served as chancellor for eight years. Chambers published numerous books, teaches at various law schools, and was a member of many boards and organizations.

See how Julius Chambers is related to other HistoryMakers
Click Here To Explore The Archive Today!