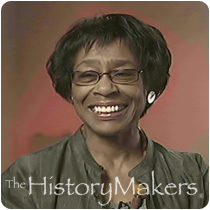 Educator Juliet Dobbs Blackburn-Beamon, founding director of Dobbs Foundation for the Arts and Humanities Education and Clark Atlanta University Humanities professor, was born on October 3, 1937, in Atlanta, Georgia, to Benjamin Allan Blackburn, and Willie Juliet Dobbs Blackburn. Blackburn-Beamon’s maternal grandfather, John Wesley Dobbs, was an early leader in Atlanta’s African American community who played a significant role in the development of the Sweet Auburn business district. Blackburn-Beamon’s parents raised her, along with her younger brother Benjamin Allan Jr., in Jackson, Mississippi, where they worked as educators.

Though eventually she returned to academia and was awarded a Ph.D. in humanities from Clark Atlanta University, for the next period of her life Blackburn-Beamon worked in the commercial and government arenas. Blackburn-Beamon was an assistant buyer at Alexander's from 1961 to 1962 and moved on to Lane Bryant in 1963 to become a buyer in women's sportswear. In 1966, Blackburn-Beamon began to teach salesmanship and junior management with the Manpower program for State of New York Department of Labor. At Bronx Community College and Kingsboro College, Blackburn-Beamon taught marketing. From 1968 to 1971, Blackburn-Beamon lived and worked in the Bahamas developing training programs with British American Life Insurance Company. Blackburn-Beamon returned to New York City in 1971 to train for a position in upper management at Sears Roebuck; her work for Sears brought her to Atlanta, where her cousin, Maynard Jackson, was serving his first term as mayor. In Atlanta, Blackburn-Beamon transferred to a job marketing a line of black hair care products called LeConté. In 1977, Blackburn-Beamon went to Sierra Leone to work for the United States Government Department of State’s Agency in Development, (AID); upon her return that same year, she began working at Atlanta’s Metropolitan Atlanta Rapid Transit (MARTA). In 1979, Blackburn-Beamon married African American architect LaFayette Beamon.

In 1996, Blackburn-Beamon received her doctorate and took a position as professor and chairperson of the Art and Architectural Studies Department at Morris Brown, also teaching at Spelman and Clark Atlanta. Blackburn-Beamon served as director of the John W. Dobbs Foundation for Arts and Humanities Education and on the board of Atlanta’s Center for Puppetry Arts. In addition to her professional activities, Blackburn-Beamon was also heavily active in various philanthropic pursuits in the Atlanta area. Blackburn-Beamon received the Leadership Atlanta Award in 1994, and the Collections of Life and Heritage Museum’s Support Awards in 1985 and 1990, among numerous other awards and honors throughout her career.