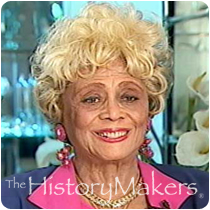 See how Julie Hunter is related to other HistoryMakers

Julie Hunter was born on December 4, 1912 in Jacksonville, Florida to dressmaker Mary Collins and post office superintendent Dez Corbett. She went on to become a successful businesswoman active in charitable organizations.

An energetic only child, Hunter (then Corbett) grew up playing every sport she could. Her parents separated when she was only seven. After her mother moved with her to Philadelphia, Pennsylvania in 1920, Hunter never saw her father again. That year, Hunter tasted the thrill of performing when she recited a poem on stage. She moved back to Jacksonville, graduating from Stanton High School. Then she moved to New York City, where she remains. Musically talented, she worked as a singer in various theaters and nightclubs beginning in 1933, including a week at the Apollo Theater in 1938. Her husband, Edward Hunter, sadly died the next year and she stopped performing.

Hunter then became a representative for the U.S. Social Security Administration in 1941. She began to buy apartment buildings in 1950, and by 1965 she had secured the capital to open Julie Hunter Wines and Liquors. She left her position with the S.S.A. to manage this new business full-time. Although she retired from her liquor store in 1989, Hunter continues to own and manage her real estate business, which has expanded to include eight apartment buildings.

Hunter has been active in several civic groups, including the New York Continental Society, which she served as vice president and treasurer, and the Group, which holds annual benefits that have profited the United Negro College Fund and the Harlem School of the Arts, among other worthy recipients. Hunter was also active in ABC Black Charities as well as the Bon Bons, a social organization for which she served as president and treasurer.

Julie Hunter was interviewed by The HistoryMakers on March 2, 2002.

See how Julie Hunter is related to other HistoryMakers
Click Here To Explore The Archive Today! 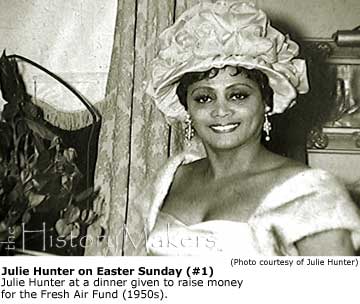 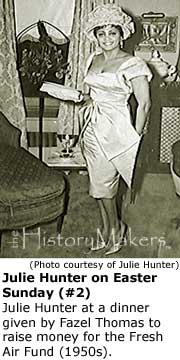