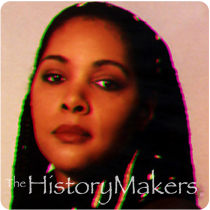 See how Julie Dash is related to other HistoryMakers

Writer, producer, and director Julie Ethel Dash was born on October 22, 1952, in Manhattan, New York, to Rhudine Henderson and Charles Edward Dash. After graduating from Jamaica High School, Dash received her B.A. degree in film production from City Colleges of New York in 1974, and her M.F.A. degree in film and television at the University of California Los Angeles. Prior to receiving her M.F.A. degree, Dash was a two year Conservatory Fellow (Producing/Writing) at the American Film Institute’s Center for Advanced Film Studies.

Dash began her study of film in 1969 at the Studio Museum of Harlem’s Cinematography Workshop, with a special interest in foreign film. She was then accepted into film school at the Leonard Davis Center for the Performing Arts, where she wrote and produced a promotional documentary for the New York Urban Coalition called Working Models for Success. After Dash graduated, she moved to Los Angeles and attended the Center for Advanced Film Studies and the American Film Institute. In 1975, Dash directed Four Women, a “choreopoem” based on the song of the same title by singer Nina Simone. In 1977, Dash directed the film, Diary of an African Nun, which was shown at the Los Angeles Film Exposition and won her a Director’s Guild Award for student filmmaking.

In 1983, Dash directed Illusions, a short film about a young African American woman passing for a white executive assistant in 1940s Hollywood. The film won her the 1989 Jury’s prize for Best Film of the Decade by the Black Filmmaker Foundation.

Dash received her highest acclaim for the 1991 film, Daughters of the Dust, an original story and screenplay. The release of the film marked Dash as the first African American woman to have a full-length general theatrical release in the United States. In 1999, the 25th annual Newark Black Film Festival honored Daughters of the Dust as being one of the most important cinematic achievements in black cinema in the 20th century. In 2004, The Library of Congress placed Daughters of the Dust on the National Film Registry. This distinguished film joined 400 other American-made films that are being preserved and protected as National Treasures.

Dash's novel, Daughters of the Dust was published by Dutton Books in 1997. The novel is the continuing story of the Peazant family from the movie, and Dash wanted to have the novel titled Geechee Recollections. When going to press, however, the publisher chose to go with the well-known title from the original movie.

See how Julie Dash is related to other HistoryMakers
Click Here To Explore The Archive Today!