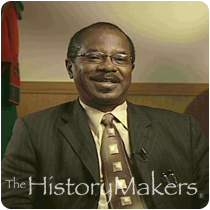 See how Julian White is related to other HistoryMakers

Julian E. White is a distinguished English Professor of Music, Chairman of the Department of Music and Director of the famous “Marching 100” Band at Florida A&M University (FAMU) in Tallahassee, Florida.

White was born in Jacksonville, Florida on March 3, 1941. His parents were Victoria (Richo) White and George White. Raised and educated in Jacksonville, White graduated from Stanton High School in 1959. He earned his B.A. degree in music education from FAMU, his M.A. degree from the University of Illinois and a Ph.D. from Florida State University.

White is a product of the “Marching 100” family, having played in the band as a student, before going on to a career as a high school band director and music teacher. He returned to FAMU to join the band staff in the 1970s as the band’s Associate Director before ascending to the top position in 1998.

Prior to joining the FAMU faculty in 1972, White was a Band Director at Northwestern Junior/Senior High from 1963 to 1965 and was the first director of the William Raines High School Band in 1965, both in Jacksonville.

For a period of ten years, White served as drill designer for the McDonald’s All-America High School Band with appearances at the Macy’s Thanksgiving Day Parade in New York City, the Tournament of Roses Parade in Pasadena, California and the Fiesta Bowl of Phoenix, Arizona. His drills have been featured in performances on all major television networks and the Bastille Day Ceremony in Paris, France.

White assists with half time shows for Bowl Games of America and is on the adjudication staff for Musical Festivals USA, International Music Festivals and Heritage Festivals, in addition to writing drill shows for high school and college bands.

White was interviewed by The HistoryMakers on October 18, 2006.

See how Julian White is related to other HistoryMakers
Click Here To Explore The Archive Today!