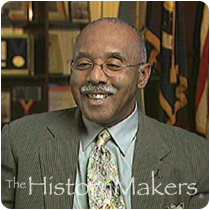 Favorite Color:
Black
Favorite Food:
Pie (Lemon Meringue)
Favorite Time of Year:
Spring
Favorite Vacation Spot:
Los Angeles, California
Favorite Quote:
God did not give anybody everything, but He gave everybody something.

Favorite Color:
Black
Favorite Food:
Pie (Lemon Meringue)
Favorite Time of Year:
Spring
Favorite Vacation Spot:
Los Angeles, California
Favorite Quote:
God did not give anybody everything, but He gave everybody something.

Physicist and federal government administrator Julian Manly Earls was born on November 22, 1942 in Portsmouth, Virginia to James and Ida Deberry Earls. He graduated from Crestwood High School in Chesapeake, Virginia in 1960 and went on to earn his B.S. degree in physics from Norfolk State University in 1964. Upon the advice of his mentor, Dr. Roy A. Woods, Earls attended the University of Rochester School of Medicine and Dentistry to obtain his M.S. degree in radiation biology in 1965. Earls then moved to Cleveland to work at NASA for six years at the Lewis Research Center. NASA sponsored Earls to obtain his Ph.D. degree in radiation physics at the University of Michigan in 1973. Also, while working at NASA, he graduated from the Harvard Business School Program for Management Development in 1978.

Earls has been awarded honorary degrees by Vaughn College of Aeronautics and Technology in Queens, New York, Nova Southeastern University in Fort Lauderdale, Florida, and North Carolina Agricultural and Technical State University in Greensboro, North Carolina. He has been a member of the National Association for the Advancement of Colored People, the National Technical Association, the National Society of Black Engineers, the National Society of Black Physicists, the Development Fund for Black Students in Science and Technology, the Kappa Alpha Psi Fraternity, and the Sigma Pi Phi Fraternity. An avid runner, he has run at least twenty-five marathons and was given the honor of being a torchbearer for the 2002 Winter Olympic Games in Salt Lake City, Utah. Earls and his wife, Zenobia, reside in Beachwood, Ohio. They have two sons, Gregory and Julian, Jr., and one granddaughter, Madisyn Chandler.

Julian Earls was interviewed by The HistoryMakers on January 10, 2005.

See how Julian Manly Earls is related to other HistoryMakers
Donate Now
Click Here To Explore The Archive Today!