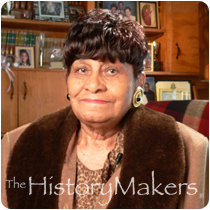 See how Julia Purnell is related to other HistoryMakers

Purnell completed her B.A. degree with honors with a major in psychology and a minor in education at Allen University in Columbia, South Carolina and went on to receive her M.A. degree in educational psychology from Atlanta University in 1942. Afterwards, she pursued advanced work at several other universities and earned her specialist teaching certificate in reading from Colorado State College of Education. Since then, Purnell has been the recipient of eight honorary degrees.

Purnell’s lifelong service to the AKA Sorority began with her initiation into the Beta Zeta Omega Chapter in Orangeburg, South Carolina. She fulfilled many leadership roles in her home chapter, including Chapter President, Vice President, Parliamentarian, advisor to the Undergraduate chapter and Recording Secretary. She also served as the South Eastern Regional Director.

Purnell was elected as the 16th International President of the Sorority in 1962 at the Sorority’s national convention in Detroit, Michigan, succeeding Marjorie H. Parker in office. One of her first challenges as president was the implementation of the recommended changes outlined by the Sorority’s Study Commission Report. The result was the creation of new manuals and handbooks that continue to influence the Sorority’s structure and operation. Other highlights of Purnell’s term included obtaining a multi-million dollar contract for the establishment of a Residential Job Corps Center for Women in Cleveland, Ohio. She played a significant role in the effort for civil rights as a participant at the invitation of President Kennedy in the “White House Conference of Three Hundred Women,” and in 1964, she mustered national support for the passage of the Civil Rights Act. Under Purnell’s leadership, a program office was set-up in Washington, D.C.; the second chapter of the Sorority was established outside of the United States in Nassau, Bahamas, and in 1965, she convened the first Undergraduate Leadership School held in Zion, Illinois.

Purnell is a well-respected professor, having spent more than two decades at Southern University in Baton Rouge before her retirement in 1986.

Purnell has long been dedicated to community service and launched, with her late sister Christine, a Service Center at Bethel A.M.E. Church. As a member of the AKA Sorority and the Links, Inc., she holds the distinction of being the only African American female to have been president of both organizations. She is also a life member of the National Council of Negro Women and the NAACP. She has further served her community through the Baton Rouge YWCA, Women in Politics, the League of Women Voters, The Blundon Home for Orphans, the local Girl Scouts’ Executive Board and the Steering Committee of the Status of Women in Louisiana.

Purnell is the widow of Clifton A. Purnell, Sr., long-time athletic director at Capitol Senior High School in Baton Rouge, she has one son, Clifton, Jr. and two grandchildren. She continues to live in Baton Rouge, Louisiana where she has been honored by several local and national organizations including the Women’s Greater Council of Baton Rouge.

Purnell was interviewed by The HistoryMakers on March 28, 2008 as part of the Alpha Kappa Alpha Sorority’s Centennial Boulé 2008 celebration. Segments of these interviews were used in a DVD entitled A.K.A. Sorority: A Legacy of Supreme Service.

See how Julia Purnell is related to other HistoryMakers
Click Here To Explore The Archive Today!