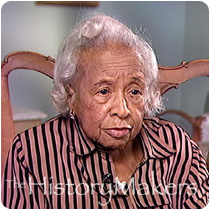 See how Julia Harden is related to other HistoryMakers
Donate Now

Julia Woodhouse Harden was born on July 6, 1909 in Baltimore, Maryland. She was the only child of Mary Locks Woodhouse and John Wesley Woodhouse. She was raised on Pressman Street in Baltimore and attended elementary school at the Division Street School. Some of her classmates included former U.S. Supreme Court Justice Thurgood Marshall, entertainer Cab Calloway and Ann Brown. She graduated from Douglas High School in Baltimore in 1925. After graduation, she attended The Ethical Cultural School, a private school in New York for one year. She was one of two African Americans at the school.

From 1926 to 1930, she attended New York University where she earned a B.A. degree. In 1931, Harden received her M.S. degree in library sciences from Columbia University in New York. Upon graduation from Columbia, she accepted a position as a librarian at Howard University in Washington, D.C. where she met her husband Dr. K. Albert Hardin. The couple was married in 1933, and had one child, a daughter, Katherine, five years later.

After her marriage, Harden resigned from her job at Howard University, but later returned to a similar position in 1940. While at Howard University, she worked under the leaderships of presidents Mordicai Johnson and James Nabrit. Her husband later went on to become the dean of Howard’s Medical School.

Harden was a proud grandmother and great-grandmother. She resided in Washington, D.C. and was active in her sorority, Delta Sigma Theta and several other civic associations.

See how Julia Harden is related to other HistoryMakers
Donate Now
Click Here To Explore The Archive Today!