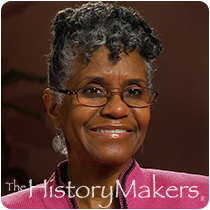 See how Judi Moore Latta is related to other HistoryMakers

Producer and educator Judi Moore Latta was born on August 3, 1948 in Tallahassee, Florida to college professors Oscar and LaVerne Moore. In 1966, Latta graduated from Florida A & M University High School as valedictorian. She earned her B.S. degree in English education from Hampton Institute in 1970 and her M.A. degree in English literature from Boston University in 1971. In 1999, Latta received her Ph.D. degree in American Studies from the University of Maryland.

In 1972, Latta was hired as an assistant professor at the University of the District of Columbia, where she taught until 1980. From 1978 to 1979, Latta worked at WETA-TV/FM as a producer for From Jumpstreet: The Story of Black Music. From 1980 to 1988, she served as an independent producer for the Public Radio System and produced dozens of documentaries and other long form reports for National Public Radio. In 1984, Latta joined the faculty at Howard University as an assistant professor in the Department of Radio, Television and Film. Then, in 1988, she was hired as NPR’s first education reporter, where she was responsible for creating the Education beat for NPR’s National Desk. She then served as NPR’s executive producer of special programs and created Latin File, the first radio network Hispanic daily news program. From 1990 to 1992, Latta worked as a reporter and producer for WUSA-TV’s Capital Edition and, in 1992, served as producer of WRC-TV’s documentary special Drugs at Work. She then returned to NPR in 1992 as a senior producer of the twenty-six-part documentary series Wade in the Water: African American Sacred Music Traditions. After receiving her Ph.D. degree from the University of Maryland, and Latta was made full professor and chair of Howard University’s Department of Radio, TV and Film in 2000. In 2002, she became the first woman to serve in the role of interim general manager of Howard University’s WHUT-TV. Latta also served as co-chair of the University’s Certificate Program in Women’s Studies from 2005 to 2011, and as director of WHUR-WORLD from 2006 to 2009. In 2009, she was appointed Howard University’s executive director of communications and marketing, and served in the president’s executive leadership cabinet until 2012.

Latta has received numerous awards and recognition from the Corporation for Public Broadcasting, American Women in Radio and Television, National Education Association, National Association of Black Journalists and National Federation of Community Broadcasters. In 1992, Latta was awarded the George Foster Peabody Award for her production of Wade in the Water: African American Sacred Music Traditions. She is a community volunteer, as well as a member of the Links Inc. (Silver Spring Chapter), the Olive Branch Community Church and the National Council of Negro Women (Potomac Valley Section).

Latta and her husband, Joseph Latta, D.D.S., live in Takoma Park, Maryland. They have two daughters and four grandchildren.

See how Judi Moore Latta is related to other HistoryMakers