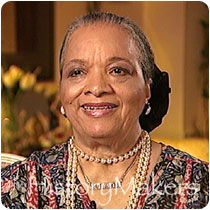 Favorite Color:
Red
Favorite Food:
Greens, Ribs, Beef
Favorite Vacation Spot:
Bahamas
Favorite Quote:
Let nobody have power over you but God. Only what you do for Christ will last.

Favorite Color:
Red
Favorite Food:
Greens, Ribs, Beef
Favorite Vacation Spot:
Bahamas
Favorite Quote:
Let nobody have power over you but God. Only what you do for Christ will last.

See how Juanita Passmore is related to other HistoryMakers
Donate Now

Born on March 4, 1926 in Chicago, Illinois, Juanita Passmore was a corporate executive, philanthropist and community activist. Passmore graduated from Chicago's Englewood High School in 1944 and traveled to Long Beach, California. She attended Long Beach City College, but then returned to Chicago, enrolling in Columbia College.

Passmore's civic commitment was outstanding. She served in leadership positions for the Chicago Chapter of Operation PUSH's Women's Board, the Chicago Gospel Festival and the board of Jazz Unites. The former president of Africare-Chicago, Passmore created numerous fundraising programs. Her work with youth included participation in Operation Snowball, a drug use prevention program focusing on leadership development; the Jesse Owens Foundation, which provides scholarships and training; and the United Negro College Fund. Former Chicago Mayor Harold Washington appointed Passmore as a Local Board of Improvements commissioner. Under his administration, she also served on the Women's Task Force. Passmore was also a member of the Congregational Church of Park Manor, Windy City Links and the National Council of Negro Women. In the book An Autobiography of Black Politics, she is recognized for community activism.

In 1974, Passmore became an employee of the Johnson Products Company. She served there as director of special promotions and was eventually promoted to the position of executive national coordinator. She also directed Johnson Products Division for Cosmetic Consultants, through which she developed training programs for several hundred women in the United States and Africa. Passmore hosted the TV program, Totally Beauty You. Passmore retired from the Johnson Product Company in 1990.

See how Juanita Passmore is related to other HistoryMakers
Donate Now
Click Here To Explore The Archive Today!