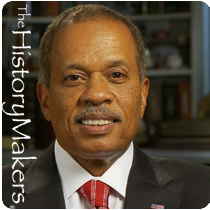 See how Juan Williams is related to other HistoryMakers
Donate Now

Television personality and news journalist Juan Williams was born to Rogelio and Alma Geraldine Williams on April 10, 1954 in Colon, Panama. At the age of four, Williams and his family moved to Brooklyn, New York. In 1969, Williams won a scholarship to attend the Oakwood Friends School in Poughkeepsie, New York, a Quaker school. Williams then attended Haverford College, where he graduated with a B.A. degree in philosophy in 1976.

After interning at the Washington Post, Williams was hired by the newspaper in 1979. He worked as an editorial writer, op-ed columnist and White House reporter in 23 years at the Washington, D.C. newspaper. Williams published his first book, Eyes on the Prize: America's Civil Rights Years (1954-1965) in 1987, the best-selling companion to the award winning documentary of the same name. Williams was then hired by Fox News Channel in 1997 as a contributor. A year later, his second book, Thurgood Marshall: American Revolutionary, about the pioneering Supreme Court justice, was published. It was designated a New York Times Notable Book of the Year. After serving as co-host of the television news program America’s Black Forum, Williams was hired as host of the National Public Radio call-in program Talk of the Nation in 2000. He wrote his third book, This Far by Faith: Stories from the African American Religious Experience, a companion to the critically acclaimed Public Broadcasting System documentary. Williams then wrote My Soul Looks Back in Wonder: Voices of the Civil Rights Experience and Enough: The Phony Leaders, Dead-End Movements, and Culture of Failure That Are Undermining Black America--and What We Can Do About It; the former was co-written with Pulitzer-prize winning author David Halberstam and published in 2005, and the latter was published two years later. Williams has authored six books in total.

He is also the recipient of several awards for his writing and investigative journalism, he won an Emmy Award for television documentary writing and received widespread critical acclaim for numerous projects, including a series of documentaries like Politics: The New Black Power and A. Phillip Randolph: For Jobs and Freedom. Williams has also written numerous articles for national magazines including TIME, Fortune, The Atlantic Monthly, The New Republic, Ebony and GQ.

Juan Williams was interviewed by The HistoryMakers on March 6, 2012.

See how Juan Williams is related to other HistoryMakers
Donate Now
Click Here To Explore The Archive Today!