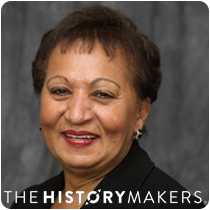 See how Joyce Roche is related to other HistoryMakers

Marketing executive and nonprofit executive Joyce Roche was born on March 16, 1947 in Iberville, Louisiana to Julia Showers Roche and John Roche. Roche attended McDough 35 High School in New Orleans, Louisiana, and graduated in 1965. In 1970, she earned her B.A. degree in math education from Dillard University in New Orleans, Louisiana. Roche went on to earn her M.B.A. degree in marketing from Columbia University in New York, New York in 1972.

Following her graduation from Columbia University, Roche began working as a manager of merchandising at Avon Products, Inc. In 1978, she left Avon to work as the director of marketing at Revlon, Inc. She returned to Avon in 1981, and served as the first female African American Vice President at Avon and its first Vice President of Global Marketing. Roche went on to work at Carson Products, Inc. in 1995. At Carson Products she served as executive vice president of marketing, and was then promoted to president and chief operations officer. She then began working as an independent marketing consultant in 1999; and, in 2000, Roche became the president and chief executive officer of Girls, Incorporated.

In 2013, Roche published a business memoir, titled The Empress Has No Clothes: Conquering Self-Doubt to Embrace Success. Roche was the recipient of the Business Achievement Award from the Black Retail Action Group in 1986, the Legacy Award from Black Career Women in 1997, the Distinguished Community Leadership Award from Bronx Community College in 2005, and the Presidential Medal of Honor from Dillard University in 2015, among many others. She has also been named one of the “21 Women of Power and Influence in Corporate America” by Black Enterprise magazine in 1991, one of the “Top 50 Women in Business” by Business Week magazine in 1992, and one of the “40 Most Powerful Executives” by Black Enterprise magazine in 1994. Roche has also received honorary doctorates from Dillard University, North Adams State College, Bryant University, Mercy College, and Old Dominion University.

Joyce Roche was interviewed by The HistoryMakers on February 7, 2017.

See how Joyce Roche is related to other HistoryMakers