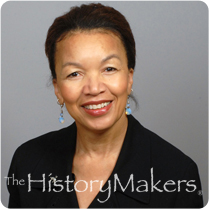 "Creativity Is Easy. Production Is Hard."

Chicago-based artist, teacher and curator Joyce Owens Anderson was born in Philadelphia, Pennsylvania. She grew up in a working class neighborhood in Philadelphia. Owens’ mother, Eloise Owens, was a trained opera singer, who encouraged her daughter to become an art teacher. Nevertheless, Owens attended Howard University, where she earned her B.F.A. degree in art. Owens then attended Yale University, earning her M.F.A. degree in painting. After working various jobs, including arts and crafts director, art teacher, and producer for Philadelphia’s CBS television station, Owens moved to Chicago, Illinois. She then spent eight years working for WBBM-TV, CBS Channel 2 in Chicago as the graphic arts coordinator for news. Owens did additional work for the company as a graphic artist, researcher and news assistant, all the time painting and exhibiting her art.

After Owens had a solo exhibition at Chicago State University she was invited to join the faculty. She has taught there since 1996, specializing in studio painting and drawing. Joyce Owens is known for addressing issues of racism, skin color and black self-determination through her paintings, masks, and installations. Her art materials are primarily acrylic paints on canvas, wood, and paper. Found objects are often incorporated into her two- and three-dimensional works. Owens’ artwork has been shown in juried, invitational, solo and group exhibitions in galleries and museums nationally. Two of her curatorial efforts were singled out by the Chicago Department of Cultural Affairs as featured programs during Chicago Artists Month. Some other highlights of her career include being selected the featured artist for Columbia College’s fifteenth annual DanceAfrica Chicago Festival; inclusion in Daniel T. Parker’s book African Art: The Diaspora and Beyond; “The Art of Culture” exhibition and catalog that also featured artist/art historian, Samella Lewis; and Howard University’s “A Proud Continuum: Eight Decades of Art at Howard University,” a juried exhibition of former Howard art students including Elizabeth Catlett.

In 2006, Owens was appointed curator of the Galleries Program at Chicago State University. That same year, she was awarded First Prize by Margaret Hawkins, a critic for ArtNews Magazine, for her Survivor Spirits Installation at the ninth Annual Art Open at Woman Made Gallery in Chicago, having been previously awarded first prize by the artist Faith Ringgold in the 5th International Open. Owens has worked for Random House as a children’s book illustrator and was hired to paint the official portrait of former Chicago mayor Eugene Sawyer, among other commissions and honors. Owens is a long time member of Sapphire and Crystals, a collective of African American women artists, and of the Black Artists of D.C. Owens is featured in the “I’ve Known Rivers” project on the website of the Museum of the African Diaspora in San Francisco, and is an associate editor of the Journal of African American History.

Owens has two sons, Scott and Kyle; she lives in Chicago with her husband, journalist Monroe Anderson.