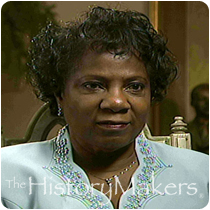 See how Joyce Moore Gray is related to other HistoryMakers

Educational specialist Joyce Moore Gray was born in Portsmouth, Virginia, in 1943. As a child, Gray played the clarinet and was encouraged by her mother and music instructor to become a teacher. She attended Southwestern Elementary School and graduated from Crestwood High School in 1961. Gray received a scholarship to attend Virginia State University where she graduated with her B.S. degree in music. She went on to earn her M.A. degree in education from the University of Nevada, Las Vegas.

After graduating from college, Gray began her career as a music teacher in Clark County School District, Las Vegas, Nevada. In 1981, she moved to Salt Lake City, Utah, where for one year she taught instrumental music at West Lake Junior High School, Granite School District. The following year, Gray was appointed to serve as that district’s Multicultural Programs Coordinator. While serving in that capacity, she also filled the position as Assistant Principal at Central Junior High School.

In 1984, Gray broke the color barrier in educational administration by becoming the first African American principal in the State of Utah. She was selected to be the Principal of Arcadia Elementary School in the Granite School District, Taylorsville, Utah. After six years, Gray continued to defy the odds when she was appointed Principal of Granite School District’s Roosevelt Elementary School. During her second year at that school, she was approached by an Assistant Superintendent in Salt Lake City School District and requested to apply to be principal of an intermediate school. In 1992, Gray became Principal of Bryant Intermediate School, Salt Lake City School District, Salt Lake City, Utah. Bryant Intermediate School became one of the nation’s top schools and was recognized as a National Blue Ribbon School of Excellence. Gray and her school team were invited to the White House to receive this award. During their Washington, D.C. visit, they met President and Mrs. Bill Clinton.

In 1995, Gray’s ambition led her to enroll in a doctorate program in Educational Leadership and Policy at the University of Utah. She continued to pursue professional goals and applied for a high school principalship. Another moment in history occurred in 1996 when Gray was selected to be principal of West High School, Salt Lake City School District. Thus, Gray became the first African American high school principal in the State of Utah. Gray’s outstanding leadership skills led her to become Utah Principal of the Year in 1999.

Gray earned her doctorate in education from the University of Utah in 2001. She went on to become Director for Career and Technical Education in Salt Lake City School District for two years prior to her retirement in 2005. Gray is now an Educational Consultant and Founder and President of her own company, Jam G Consulting, Inc.

Gray and her husband, Lloyd, reside in Murray, Utah. They have three children and eight grand children

See how Joyce Moore Gray is related to other HistoryMakers
Click Here To Explore The Archive Today!