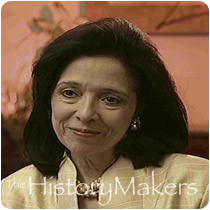 See how Joyce F. Brown is related to other HistoryMakers

University president Dr. Joyce F. Brown was born on July 7, 1947 in New York City. Brown attended New York City Catholic schools. She later attended Marymount College where she earned her B.A. degree in psychology in 1968. Following her undergraduate education, Brown enrolled in New York University, earning her M.A. degree in counseling psychology in 1971 and her Ph.D. in 1980. Brown worked at Borough of Manhattan Community College while simultaneously receiving her advanced degrees in counseling psychology. She served as Director of Instructional Testing and Research, Coordinator of Community Education Projects and the Director of Paraprofessional Teacher Education Program during her tenure at Borough of Manhattan Community College.

In 1983, Brown married civic leader H. Carl McCall. That same year, she was hired as Dean at Bernard M. Baruch College of The City University of New York, where she was in charge of Urban Affairs until 1987. Her other positions at The City University of New York included Acting President of Bernard M. Baruch College; Vice Chancellor for Urban Affairs and Development and Vice Chancellor for Student Affairs and Urban Programs. In 1987, Brown served on the commission for the Task Force report, The Black Family in New York State: Current Crisis/Recent Trends. That same year, she became the Director of Boys Harbor Inc., an organization that was established to empower children through education, cultural enrichment and social services. In 1990, Brown earned a certificate from the Educational Management Institute at Harvard University. In 1993, she was appointed Deputy Mayor for Public and Community Affairs by then Mayor David Dinkins during his re-election. After Dinkin’s mayoral loss in 1994, Brown became a Professor of Clinical Psychology at the Graduate School for The City University of New York from 1994 to 1998, where she continues to serve as professor emerita.

In 1998, Brown was the first African American and first woman to be appointed as the President of the Fashion Institute of Technology, a specialized college of art and design in New York City. Brown is a member of several boards and institutions including Linens-N-Things, Polo Ralph Lauren, Neuberger Berman, Paxar Corporation, the United States Enrichment Corporation, member of the Warm Up America Foundation, former trustee of Marymount College, and a former member of the Metropolitan Chapter of The Links.

Joyce Brown was interviewed by The HistoryMakers on June 26, 2007.

See how Joyce F. Brown is related to other HistoryMakers
Click Here To Explore The Archive Today!