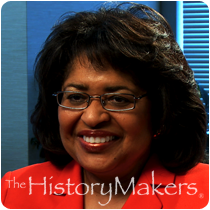 See how Joyce E. Tucker is related to other HistoryMakers
Donate Now

Experienced advocate of equal-opportunity employment Joyce Elaine Tucker was born on September 21, 1948 to Howard (George) and Vivian Tucker in Chicago, Illinois. A middle child with two sisters, Tucker attended Irving Elementary School and Proviso East High School in Maywood, Illinois where she received her diploma in 1966. Tucker earned her B.S. degree from the University of Illinois, Urbana-Champaign in 1970 and began working as a substitute teacher for Chicago Public Schools.

In 1990, Tucker was appointed to the U.S. Equal Employment Opportunity Commission by President George H.W. Bush and in 2001 President George W. Bush appointed Joyce to the White House Initiative Advisory Board for Historically Black Colleges and Universities. Tucker began her own EEO management company Tucker Spearman & Associates in 1997. Since 2002, she has been vice president of Global Diversity and Employee Rights for the Boeing Company.

Tucker has been named a “Diversity Leader” by Women of Color magazine and was the keynote speaker at the Executive Symposium for Women Business Leaders in 2006. She has also received the Legacy of Opportunity Award, awarded by the Black Law Students Association at the John Marshall Law School.

Joyce Tucker was interviewed by The HistoryMakers on May 24, 2010.

See how Joyce E. Tucker is related to other HistoryMakers
Donate Now
Click Here To Explore The Archive Today!