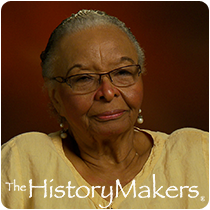 See how Josie Childs is related to other HistoryMakers
Donate Now

Civic leader and government employee Josie Childs was born on October 13, 1926, in Clarksdale, Mississippi to Julia Brown and Charles Washington, a dentist. Although born in Clarksdale, Childs grew up in Memphis, Tennessee and Vicksburg, Mississippi. Her grandfather was a successful landowner and professor, and Childs’ grandmother was a school teacher. She attended elementary school and high school in both Memphis and Vicksburg. Childs went on to attend LeMoyne–Owen College in Memphis, and then took classes at the Cortez W. Peters Business College. She also studied at Northwestern University in Chicago, where she took business courses in the late 1940s.

Childs was employed with the City of Chicago, first under sponsorship from Bob Miller in the Sixth Ward, and then under Colonel Jack Riley as an events coordinator in the 1950s. She also served as an administrator at the Metropolitan School of Tailoring. Childs went on to work with former Chicago Mayor Harold Washington on his 1977 and 1983 mayoral campaigns. She was also Mayor Washington’s aide for many years. Childs then worked at City Hall as an administrator in the City of Chicago’s Special Events and Cultural Affairs departments from 1983 until 1990. Following her work with the City of Chicago, she went on to create and promote various events, including an acknowledgement event for Great Lakes African American naval musicians.

Childs was the founder of the 2013 Harold Washington Tribute Committee, and has worked to ensure the continued legacy of Chicago’s first African American Mayor, Harold Washington. She has been a member of many organizations, including the Duke Ellington Society, Joint Negro Appeal, Know Your Chicago, Executive Service Corps., and Friends of the Chicago Public Library. She sat on the boards of the National Council for Lay Life and Work and the Christ Hospital Nursing School. Childs received the Georgia Palmer Award from Congressman Danny K. Davis in 2013. She has also donated the “Josie Brown Childs Papers,” a collection of documents consisting of family history, her political work, and her efforts to promote African American cultural and historical awareness, to the Chicago Public Library.

Josie Childs was interviewed by The HistoryMakers on August 24, 2013.

See how Josie Childs is related to other HistoryMakers
Donate Now
Click Here To Explore The Archive Today!