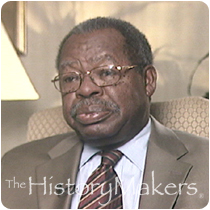 Favorite Color:
Blue
Favorite Food:
Salmon
Favorite Time of Year:
Spring
Favorite Vacation Spot:
Jamaica
Favorite Quote:
If I were doing better, there would be two of me.

Favorite Color:
Blue
Favorite Food:
Salmon
Favorite Time of Year:
Spring
Favorite Vacation Spot:
Jamaica
Favorite Quote:
If I were doing better, there would be two of me.

See how Joseph Segars is related to other HistoryMakers

Joseph Monroe Segars was born on November 6, 1938, in Hartsville, South Carolina. He was raised by his mother's sister and her husband, Walter and Francis Hines, after his parents migrated to Philadelphia in search of better jobs. His uncle was a painter and his aunt worked as a domestic. In 1956, he earned his high school diploma from Butler High School. Upon graduation he joined his family in Philadelphia and worked in a lamp factory before attending college.

Between 1957 and 1961, Segars attended Cheyney University of Pennsylvania where earned his bachelor's of science degree in education. Following his graduation, he taught sixth grade in the Gary, Indiana, public school system until 1967. That year, Segars moved back to Philadelphia where he taught sixth grade in the public schools there. At the urging of a family friend, he joined the Foreign Service in 1970 and was the first African American assigned to Vienna, where he served until 1973.

In 1974, Segars was assigned to the State Department's West African Affairs Department as a desk officer primarily responsible for Liberia and Sierra Leone. In 1976, Segars became one of the first African Americans to be assigned to strife-torn South Africa, and his arrival in Johannesburg coincided with the outbreak of unrest in Soweto. Until his departure from South Africa in 1978, Segars served as Consul General. From South Africa, Segars traveled to Kingston, Jamaica, where he served as Consul General until 1980. The following year, he served as a desk officer in the Office of Southern African Affairs overseeing three African countries. In 1983, Segars was appointed Consul General in Lagos, Nigeria, where he remained until 1986. From 1986 until 1989, he served as Deputy Chief of Mission in Tanzania, where he lobbied successfully to win the country's understanding and support for U.S. efforts to resolve major southern African conflicts. Leaving Tanzania in 1989, Segars worked as a Career Counselor in the Office of Human Resources. From 1992 until 1993, he participated in the State Department's 34th annual Seminar for Senior-level officials. In 1993, Segars received his first ambassadorship to the Republic of Cape Verde, where he remained until his retirement in 1996.

Since his retirement he has served as a consultant on Africa issues. He is a member of Omega Psi Phi Fraternity and the recipient of several prestigious awards for his foreign service. In 1997, he was awarded an honorary doctorate degree from Southeastern University.

See how Joseph Segars is related to other HistoryMakers
Click Here To Explore The Archive Today!