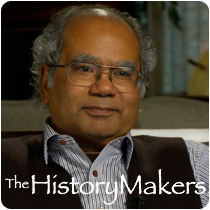 See how Joseph Gordon, II is related to other HistoryMakers

Research chemist and research manager Joseph Grover Gordon, II, was born on December 25, 1945 in Nashville, Tennessee to Joseph Grover, Sr. Juanita Elizabeth (Tarlton) Gordon. He is one of four children, including Eric Rodney, Craig Stephen, and Rhea Juanita. After briefly attending Atkins High School in North Carolina, Gordon went on to graduate from the prestigious Phillips Exeter Academy in 1963. Gordon earned his A.B. degree in chemistry and physics from Harvard College in 1966. He received his Ph.D. in inorganic chemistry from the Massachusetts Institute of Technology in 1970.

After finishing his graduate education, Gordon worked at the California Institute of Technology as an assistant professor in the Chemistry Department. In 1975, he began working as a research staff member at Almaden Research Center (IBM Research) and was promoted to interfacial electrochemistry manager in IBM’s Applied Materials Division in 1990. There, Gordon managed a research staff team and contributed greatly to the fields of materials science and electrochemistry. Between 1975 and 1994, Gordon established a program in fundamental electrochemistry that developed solid: liquid interface. From 2004 to 2009 Gordon Developed an exploratory battery materials research program and evaluated new battery technology for ThinkPad strategic planning in Raleigh, North Carolina and development in Yamato, Japan. In 2009, Gordon was hired as the senior director for the advanced technology group in at Applied Materials, Inc. Throughout his career, Gordon has published numerous research papers in leading scientific journals, such as Physical Review Letters and Sensors and Actuators A: Physical.

Gordon is a member of several professional organizations, including the American Chemical Society, Society for Analytical Chemistry, Electrochemical Society, and the National Research Council. Throughout his career, Gordon has shown a continued commitment to scientific research and has credited with twelve United States Patents. Gordon has been recognized many times for his work. In 1993, he was awarded the Black Engineer for Outstanding technical Achievement, and in 1993 the National Organization of Black Chemists and Chemical Engineers awarded Gordon the Percy L. Julian Award. Gordon and his wife, Ruth M., reside in San Jose, California.
Joseph G. Gordon, II was interviewed by The HistoryMakers on November 7, 2012.

See how Joseph Gordon, II is related to other HistoryMakers
Click Here To Explore The Archive Today!