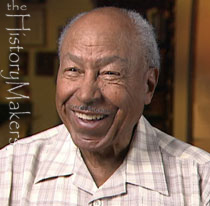 "Once you've been shot at by real bullets, pop guns don't bother you."

Retired United States Air Force Major Joseph Philip Gomer served as a fighter pilot with World War II's famed Tuskegee Airmen. Gomer was born on June 20, 1920 in Iowa Falls, Iowa. From the time he was a small boy, he dreamed of flying airplanes.

Gomer and his brother attended school in a town where there were never more than three black families. The only black in his class, Gomer graduated from Iowa Falls High School with honors in 1938. He completed two years of study at Ellsworth College in Iowa Falls, where he took a class in flight instruction. When he enlisted in the Army in 1942, Gomer signed up for pilots' training. His previous flying experience at Ellsworth qualified him to be sent to Tuskegee Army Air Field in Alabama to participate in President Roosevelt's new program to train black pilots. Gomer received his wings in May of 1943. He was assigned as a Second Lieutenant to the segregated 332 Fighter Group and sent to Ramitrella, Italy, to join the 301st Fighter Squadron.

The 332 Fighter Group served as escorts for the 15th Air Force, running bombing missions in Germany. Engaging German fighters and attacking enemy positions, they fulfilled their mission to perfection-never losing a bomber to the enemy. The white bomber pilots called their guardians the "Red Tailed Angels" after the distinctive markings on their planes. Many of these white bomber pilots did not know that their guardians were black. In Italy, the Red Tails flew over 1,500 sorties, downing 111 enemy aircraft and sinking one German destroyer as 66 black pilots were killed in action. Joseph Gomer shared a tent with three other airmen, but within eight months all of them were killed, leaving him the sole survivor. He crash-landed a P-39, lost his canopy, and was bullet ridden in a P-47, but fought with skill and valor in over 68 sorties with the enemy. Fighting racism as well as the Germans, Gomer remained with the Air Force after the war and was still in service on July 26, 1948, when President Truman signed Executive Order 9981 integrating the United States Armed Forces.

After retiring from the Air Force, Gomer worked for the United States Forestry Service where he earned meritorious recognition for his work in providing equal opportunities for minorities. He currently lives with his wife, Elizabeth, in Duluth, Minnesota. He volunteers in the schools and at church and keeps the name of the Tuskegee Airmen alive.