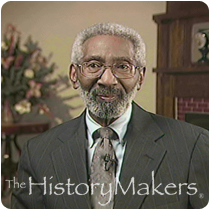 See how Joseph Donovan is related to other HistoryMakers
Donate Now

Edward R. Murrow Award-winning journalist Joe Donovan was born Joseph James Donovan on March 29, 1936, in Camden, New Jersey, to Willie Virginia Jones and Phillip James Donovan. Donovan grew up in rural Chislehurst and attended Chislehurst School, Belmont Elementary School, Sulzberger Junior High School and Edward Bok Vocational Technical High School, from which he graduated in 1954. In October of 1955, Donovan enlisted in the United States Air Force, and by 1959 he had been promoted to the rank of staff sergeant. Leaving the military in 1960, Donovan, after he was refused admittance to Temple University, returned to Edward Bok High School and enrolled in cartography and photography.

In 1960, Donovan was hired as a librarian at the Philadelphia Daily News. In 1963, Donovan worked as a background writer for a story on the Bay of Pigs invasion of Cuba; six months later he replaced the newspaper’s only African American reporter. In 1970, Donovan joined the staff of KYW News Radio and covered George Wallace’s speech in Philadelphia’s Fishtown neighborhood. Donovan also co-hosted Black Edition with Malcolm Poindexter in 1970. In 1972, Donovan began to appear with Reggie Bryant on the television show Black Perspectives on the News. In 1976, Donovan was awarded a Ford Foundation Fellowship and wrote the critique of the public education system Why Can’t Johnny Read?

From 1978 to 1980, Donovan served as assignment manager for CBS affiliate WCAU-TV10. In 1979, Donovan covered the Three Mile Island nuclear emergency, and in 1980, he received the Edward R. Murrow Award for excellence in electronic journalism. That same year, Donovan left CBS and joined the Environmental Protection Agency as Regional Superfund Information officer. From 1990 to 2000, Donovan was employed by Waste Management, Inc; he was the first African American at the Lisle, Illinois, corporate headquarters, where he served as corporate director of community relations. Donovan was also a member of the National Association of Black Journalists.

See how Joseph Donovan is related to other HistoryMakers
Donate Now
Click Here To Explore The Archive Today!