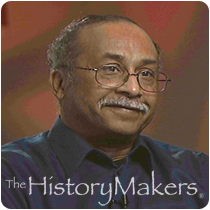 See how Jose J. Mapily is related to other HistoryMakers

Retired architecture professor and artist Jose Julian Mapily was born on August 13, 1941 in Washington, D.C. to Gladys Mines Mapily, a clerk, and William Mapily, a master sheet metal mechanic. Mapily attended and graduated from Howard University in 1965, earning his B.A. degree in architecture. In 1972, Mapily earned his M.A. degree in city and regional planning, also from Howard University.

Mapily started his career at Morgan State University as an associate professor of architecture and city planning on the graduate level program. He then returned to his alma mater, Howard University, in 1980 again serving as associate professor of architecture and city planning. While serving as an educator, Mapily also worked at a local architectural firm, Bryant and Bryant Architects and Planners. He served as the principal architect in charge of designs for some Washington, D.C. building projects including the Charles Hamilton Houston Neighborhood Center, the Mary McLeod Bethune House and the Metropolitan A.M.E. Church. Mapily also completed designs for a $20 million project for the University of the District of Columbia, Van Ness campus.

Mapily has also begun a career as an artist. His artwork can be described as gridlike paintings made out of white dots on a dark ground that resemble schematic drawings of buildings or circuit diagrams for electrical components. In 2002, Mapily’s artwork appeared at the Gala Auction Exhibition at the WPA/Corcoran Gallery of Art in Washington, D.C. In 2004, he participated in the exhibition, Medusa Muse Artists at North Carolina Wesleyan College Gallery in Rocky Mount, North Carolina.

Mapily was interviewed by The HistoryMakers on April 26, 2007.

See how Jose J. Mapily is related to other HistoryMakers
Click Here To Explore The Archive Today!