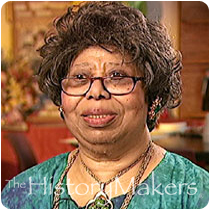 See how Jorja Palmer is related to other HistoryMakers
Donate Now

Keenly interested in history as a youth, Palmer was a voracious reader who loved to discuss local and international issues. As a young mother, she was drawn to neighborhood meetings and by 1960 she was head of the West Chatham Improvement Organization Education Committee and sent by that body to the newly formed Chicago Community Council Organization (CCCO). The CCCO's issue was the elimination of the "Willis Wagons," portable trailers authorized by school superintendent Benjamin Willis that supplanted new school construction in Chicago's overcrowded segregated black neighborhoods. Palmer was an important leader in the CCCO's historic school boycott, in which 80 percent of black families kept their children out of school. In the 70s, she engaged in the fight for an African American School Board President for the Chicago Public Schools. Palmer made history as a delegate to the National Black Political Assembly in Gary, Indiana. She also joined with Thomas Todd, Lu Palmer and Congressman Ralph Metcalfe in the formation of the Black Crime Commission to combat police brutality.

In 1976, she married journalist and political pundit Lu Palmer. Together, they were determined to fight the status quo. In the 80s, Lu and Jorja made a move for real community power when they convened "Toward A Black Mayor" at Malcolm X College in 1981. It was Jorja Palmer who came up with the process for selecting a black mayoral candidate. The Palmers launched the largest voter registration drive in U. S. history, solidifying a core constituency of black voters that persuaded Harold Washington to run for Mayor of the City of Chicago. On October 22, 1992, Palmer established the Stanford English Home for Boys, the first group home for African American children in Illinois, named for her later autistic son. Palmer lived with her husband on Chicago's south side until her death on December 29, 2005.

See how Jorja Palmer is related to other HistoryMakers
Donate Now
Click Here To Explore The Archive Today!