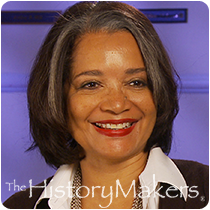 See how Jonelle Procope is related to other HistoryMakers
Donate Now

Lawyer and foundation president Jonelle Procope was born on March 20, 1951 in Baltimore, Maryland. Her mother, Corinne, was a teacher; her father, John L. Procope, Sr., was a businessman and hospital administrator. Procope was raised in Philadelphia, Pennsylvania and graduated from the Philadelphia High School for Girls. She received her B.A. degree in economics from Howard University, and her J.D. degree from St. Johns University.

In 1977, Procope was hired as an associate attorney at the law firm of Skadden, Arps, Slate, Meagher & Flom in New York City. She then joined Viacom International Inc. in 1980, where she specialized in entertainment law for the company’s divisions including Viacom International, MTV, Showtime Entertainment, and Viacom Productions. From 1988 to 1994, Procope worked as director of business affairs for Bristol-Myers Squibb Company, where she served as primary legal counsel to the Advertising and Media departments for the company’s Consumer Products Group. From 1998 to 2003, she was vice president of business and legal affairs for Blackground Records, an independent record label in New York City. Procope was then named president and chief executive officer of the Apollo Theater Foundation, Inc. in March of 2003.

Procope has also been active in numerous civic and community organizations. She sits on the boards of New York Public Radio, the Arthur Ashe Learning Center, the 125th Street B.I.D., and the Apollo Theater Foundation, Inc. She is a member of the Friends of Education Committee of the Museum of Modern Art and the NYC Landmarks50 Advisory Committee.

Procope has been profiled in The New York Times Public Lives column, which recognizes individuals who have distinguished themselves through significant contributions to New York City, named as one of Portfolio magazine's 73 Biggest Brains in Business, profiled in Ebony magazine, and honored by The New York Daily News as one of 100 Women Who Shape Our City. In 2014, she received the Matrix Award – “Women Who Change the World” from New York Women in Communications.

Procope is married to Frederick O. Terrell and resides in New York City. They are parents of two adult sons, Matthew and Evan.

Jonelle Procope was interviewed by The HistoryMakers on May 8, 2014.

See how Jonelle Procope is related to other HistoryMakers
Donate Now