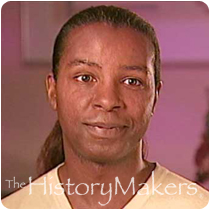 See how Jonathan Green is related to other HistoryMakers

Painter and printmaker Jonathan Green is considered one of the most important contemporary painters of the Southern experience. Born on August 9, 1955, in Gardens Corner, South Carolina, Green was the second of seven children. He was raised in the home of his maternal grandmother, Eloise Stewart Johnson, where he learned the Gullah dialect and culture of the coastal Southeast.

Green’s interest in the arts was first nurtured as a student at Beaufort High School. After graduation, Green joined the U.S. Air Force in order to travel and obtain an education. He then attended the School of the Art Institute of Chicago, receiving a B.F.A. degree in 1982, making him the first known artist of Gullah heritage to receive formal artistic training at a professional art school.

The artwork of Green is heavily influenced by his Gullah heritage with vividly colored paintings and prints documenting everyday chores, in addition to celebrating Gullah life’s rites of passage. By returning his art to his childhood upbringing, Green has created an autobiographical body of work in addition to documenting a vanishing way of life.

Since 1982, Green has participated in four traveling exhibitions throughout the United States and forty-eight solo exhibitions. His work is in the permanent collections of numerous museums, including The Morris Museum (Augusta, Georgia), The Afro-American Museum of Philadelphia, The Naples Museum of Art (Naples, Florida) and The IFCC Cultural Center (Portland, Oregon). Green has received awards recognizing both his work and his civic contributions. In 1996, Green received an honorary doctorate from the University of South Carolina, the same year a book, Gullah Images: The Art of Jonathan Green, reproducing a large number of his pieces was published. In 2009, Green received the Key of Life Award for his contributions and achievements in the visual fine arts from the NAACP at the organization’s fortieth Image Awards.

See how Jonathan Green is related to other HistoryMakers
Click Here To Explore The Archive Today!