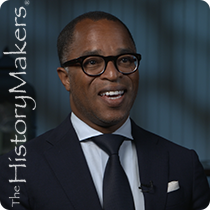 See how Jonathan Capehart is related to other HistoryMakers
Donate Now

Journalist Jonathan Capehart was born on July 2, 1967 in Newark, New Jersey. He graduated from Saint Benedict's Preparatory School and received his B.A. degree in political science from Carleton College in Northfield, Minnesota in 1989.

Capehart first worked as assistant to the president of the WNYC Foundation. He then became a researcher for NBC's The Today Show. From 1993 to 2000, he served as a member of the New York Daily News’ editorial board. In 1999, the New York Daily News editorial team received a Pulitzer Prize for the paper’s series of editorials that helped save Harlem’s Apollo Theater. Capehart then went on to work as a national affairs columnist for Bloomberg News from 2000 to 2001, and later served as a policy advisor for Michael Bloomberg in his successful 2001 campaign for Mayor of New York City. In 2002, Capehart returned to the New York Daily News, where he worked as deputy editorial page editor until 2004, when he was hired as senior vice president and senior counselor of public affairs for Hill & Knowlton. In 2007, Capehart joined the staff of the Washington Post as a journalist and editorial board member. There, he wrote for the Washington Post's PostPartisan blog and served as a contributor for MSNBC. He also served as a substitute anchor on many MSNBC programs, including AM Joy, The Cycle, Martin Bashir, and Way Too Early, and appeared regularly on Hardball and other programs. Capehart has also been a member of the Reporters Roundtable on ABC News' This Week with George Stephanopoulos, as well as the host of America on the Line, a news and national call-in show about the 2018 midterm elections on WNYC New York Public Radio.

Capehart served as a moderator at the Aspen Ideas Festival and for the Aspen Institute, the Center for American Progress and at the Brussels Forum of the German Marshall Fund. He has also moderated sessions at the Atlantic’s Washington Ideas Forum and for the Connecticut Forum, and he was a fellow at the Georgetown Institute of Politics and Public Service in 2019.

Capehart has been recognized for his work in journalism. In 1999, he was on the editorial board at the New York Daily News that won a Pulitzer Prize. Capehart was also named an Esteem Honoree in 2011. In 2014, The Advocate magazine ranked Capehart nineth out of fifty of the most influential LGBT people in media. In December 2014, Mediaite named him one of the “Top Nine Rising Stars of Cable News.” Equality Forum made him a 2018 LGBT History Month Icon in October. In May 2018, the publisher of the Washington Post awarded him an “Outstanding Contribution Award” for his opinion writing and “Cape Up” podcast interviews.

Jonathan Capehart was interviewed by The HistoryMakers on August 16, 2017.

See how Jonathan Capehart is related to other HistoryMakers
Donate Now