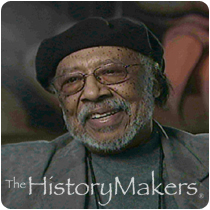 See how Jon Onye Lockard is related to other HistoryMakers

Painter, educator, and historian, Jon Onye Lockard, was born January 25, 1932, on Detroit’s east side; his mother, Lillian Jones, came from Port Arthur, Mississippi, and his father, Cecil E. Lockard, from Marianna, Arkansas. Lockard grew up around Franklin’s Settlement House with Milt Jackson, Kenny Burrell, and Oscar Graves; he attended Norville and Smith Elementary Schools and Barbour Intermediate School. At age twelve, Lockard worked for the Overton Sign Company; he later won a job with Walker and Company, but was later rejected because of his race. Lockard graduated from Eastern High School in 1948; he then took classes at Meinzingers School of Art and worked for the Palmer Paint Company. Lockard graduated from Wayne State University in 1955 and pursued further study at the University of Toronto.

Working as a traveling portraitist in the late 1950s and early 1960s, Lockard painted portraits at the Seattle World’s Fair in 1962. In Houston, Lockard met Texas Southern University’s John Biggers. In 1967, Lockard attended Jeff Donaldson’s CONFABA at Northwestern University and witnessed the founding of the AFRICOBRA group. During this period, Lockard added the name, “Onye” which is from “Onye Eje” or Ibo language for “artistic traveler.” In 1969, Lockard attended the National Conference of Artists (NCA) meeting in Chicago. As an illustrator, Lockard contributed to independent black publishing efforts. Lockard’s drawing of angry youth, entitled What are we going to tell them? (1967) appeared on the cover of I.P.E.’s Black Books Bulletin. Known for his rich use of color and powerful use of form, Lockard’s murals find a natural home on college campuses; his piece, Continuum, spans Wayne State University’s Manoogian Center, and his other murals are located at Central State University, the University of Michigan, and Detroit’s Dr. Charles Wright Museum of African American History. Lockard’s work has been exhibited nationally and internationally for several decades. Robin Dunitz featured Lockard’s mural work in Walls of Pride.

Lockard taught life drawing, portrait painting, and the art and culture of African Americans for over forty years, gaining popularity as an instructor at the University of Michigan and at Washtenaw Community College. Lockard also served as president of the NCA, and associate director of The Society for the Study of African Culture and Aesthetics. Lockard co-produced and hosted Barden Cable’s Sankofa television program. Lockard and his wife, Leslie, raised three children.

See how Jon Onye Lockard is related to other HistoryMakers
Click Here To Explore The Archive Today!