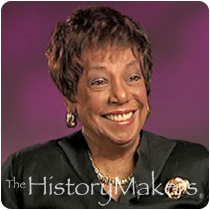 See how Jolyn H. Robichaux is related to other HistoryMakers

Successful businesswoman Jolyn H. Robichaux was born in Cairo, Illinois, on May 21, 1928, to Margaret Love and Edward Howard. Robichaux graduated from Sumner High School in 1945 and went on to attend Fisk University in Nashville, Tennessee, for two years. In 1960, Robichaux received her B.A. degree in education from Chicago Teachers College.

On June 6, 1952, she married Joseph J. Robichaux, with whom she had two children: Sheila and Joseph, Jr. While raising her children, Robichaux worked as a medical assistant; the first African American employee of Betty Crocker; and as a secretary and fundraiser at a public relations firm.

In 1967, as a business investment, Robichaux and her husband purchased Baldwin Ice Cream Company; created in 1922, it was the first African American-owned ice cream company in Chicago. Robichaux worked as a secretary for the company; following her husband's death in 1971, she assumed leadership of Baldwin, becoming president and CEO.

When Robichaux took over Baldwin, the company's gross sales were $300,000; she took her new role seriously, and in 1975 earned a certificate in ice cream technology from Pennsylvania State University. In 1984, Robichaux became the second African American to open a food concession at O'Hare International Airport; she eventually grew Baldwin into a major corporation, with annual sales topping $5 million by 1985. Robichaux was also named the National Minority Entrepreneur of the Year by the U.S. Commerce Department in 1985, for which she was presented with the award by Vice President George Bush; she was the first African American woman to receive this honor.

Robichaux retired from Baldwin Ice Cream in 1992; from 1999 until 2001, she worked for a heart disease project at the University of Texas in Dallas. In her retirement, Robichaux continued to serve on various boards and professional organizations.

See how Jolyn H. Robichaux is related to other HistoryMakers
Click Here To Explore The Archive Today!