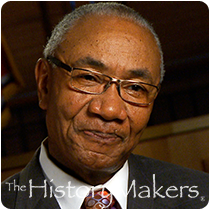 Favorite Color:
Blue
Favorite Food:
Pasta
Favorite Time of Year:
Fall
Favorite Vacation Spot:
State of Tennessee
Favorite Quote:
God Cannot Get You Through It 'Til He Gets You To It.

Favorite Color:
Blue
Favorite Food:
Pasta
Favorite Time of Year:
Fall
Favorite Vacation Spot:
State of Tennessee
Favorite Quote:
God Cannot Get You Through It 'Til He Gets You To It.

See how Johnny Shaw is related to other HistoryMakers

Radio station owner and state representative Johnny W. Shaw was born on January 5, 1942 in Laconia, Tennessee. He attended the American Baptist Theological Seminary in Nashville, Tennessee, where he received a degree in theology.

In the 1960s, Shaw was the spokesman of a local gospel group’s Sunday morning radio program on WBOL-AM in Bolivar, Tennessee, where he was also the first African American staff announcer. He was later promoted to program director and assistant manager, and then as general manager of WBOL. In addition to his work at WBOL, Shaw served as a minister at Saint John Missionary Baptist Church in Stanton, Tennessee. He also sang with the musical group, the Shaw Singers, and worked as a psychologist.

In 1997, Shaw was appointed as a co-commissioner of Hardeman County in Tennessee, where he served for one-and-a-half terms. In 2000, he was elected to the Tennessee House of Representatives, representing District 80, where he became the first African American to serve in the state legislature in rural west Tennessee since reconstruction. Shaw won re-election in 2002, 2004, 2006, 2008, 2010 and 2012. While in public office, he served as house member of the 102nd through 108th General Assemblies; member of the House Finance, Ways and Means Committee; member of the House State Government Committee and Subcommittee; member of the Joint Pensions and Insurance Committee; and chair of the Tennessee Legislative Black Caucus.

Shaw and his wife have six children. They reside in Bolivar, Tennessee.

Johnny Shaw was interviewed by The HistoryMakers on April 23, 2014.

See how Johnny Shaw is related to other HistoryMakers
Click Here To Explore The Archive Today!