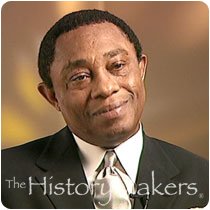 See how Johnny M. Brown is related to other HistoryMakers
Donate Now

Businessman Johnny Mack Brown, of the Brown Tire Corporation, was the fifth independent-and the first African American-Goodyear dealer in the country. He was born in 1943 in rural Alabama. His father, Abe, was a sharecropper and his mother, Josephine, did housework in the South. Brown was the seventh of 12 children. Brown and his siblings were also hired out to pick and chop cotton in the 1960s for $2 per day. After his father's death in 1962, Brown and his brothers decided to finish college and go into business in order to take of their mother.

Brown graduated with a B.A. from Chicago State College and then earned a Master's degree from Governor's State College. He and his five brothers pooled together $19,000 to start a business, but they could not, because they were turned down for a Small Business Administration Loan. Brown took a job teaching as well as a job at Goodyear Tire changing tires. The Goodyear store was losing money and the time was right for Brown, who was able to use the money he and his brothers had saved. In 1970, the store changed from Goodyear to Johnny Brown's Tire Company.

As President and Chairman of the Board for the Brown Tire Corporation, Brown saw his business expand from one store to a large corporation with multiple Chicago locations in addition to stores in Atlanta, Georgia and Cleveland, Ohio.

Aside from his busy career, Brown still found to help the community. He was honored with various awards for his continued support and involvement with the community and, most importantly, with children. Brown had twin sons, Johnny Jr. and Joshua, also of Chicago.

See how Johnny M. Brown is related to other HistoryMakers
Donate Now
Click Here To Explore The Archive Today!