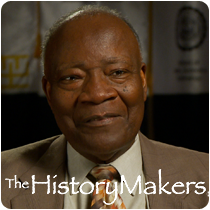 See how Johnny Houston is related to other HistoryMakers

In 1975, Houston was appointed as the chair of the Atlanta University Math and Computer Science Department. During a leave period, he served as the Calloway Professor of Computer Science at Fort Valley State University. In 1984, Houston became the vice chancellor of academic affairs and professor of math and computer science at Elizabeth City State University (ECSU). He was named senior research professor in the ECSU Department of Mathematics and Computer Science in 1988. Throughout his career, Houston has held several positions as a specialist in mathematics and computer science, including serving as a member National Institute of Health’s MARC Committee from 1980to 1986, a member of the Board of Governors of the Mathematical Association of America from 1992 to 1995, and as a member of the Human Resource Advisory Group for the Mathematical Sciences Research Institute from1993 to1998. In 1996, Houston established the Computational Science and Scientific Visualization (CSSV) Center at ECSU; and, in 2002, he established the African Studies (TLMP) at ECSU. Houston served as the director of both programs until 2008. Houston is a co-founder of the National Association of Mathematicians, Inc. (NAM), and served as NAM’s executive secretary from 1975 until 2000. Houston published The History of NAM, the First 30 Years; 1969-1999 in 2002 and is the author of more than forty books and articles on the science, mathematics, and education

Houston has received several awards and honors, including the University Of North Carolina Board Of Governors Teaching Excellence Award in 1996, NAM’s Lifetime Achievement Award in 1999, and the Purdue University BCC Pioneer Award in 2009. Houston has been included American Men and Women of Science, Who’s Who Among Black Americans, Who’s Who in America, and the World Directory of Mathematicians. In 2010, Houston was named professor emeritus at Elizabeth City State University after twenty-six years of service.

Houston is married to Virginia Lawrence. They have two daughters: Mave Talibra and Kaiulani Michelle.

Mathematician, education administrator, and research director Johnny L. Houston was interviewed by The HistoryMakers on February 25, 2013.

See how Johnny Houston is related to other HistoryMakers
Click Here To Explore The Archive Today!