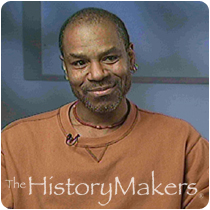 See how Johnny Coleman is related to other HistoryMakers

Installation artist, sculptor, and college professor Johnny Coleman was born in Saugus, Massachusetts on January 17, 1958. The son of Florence McCoy and John H. Coleman, he graduated from Redlands High School in Redlands, California and later earned his B.F.A. degree from the Otis Art Institute of the Parson’s School of Design and his M.F.A. degree from the University of California, San Diego.

Coleman is a tenured faculty member at Oberlin College where he teaches studio art and African American studies. His work has been exhibited in numerous galleries and museums, including Cleveland’s Museum of Contemporary Art, the David Zapf Gallery in San Diego, the Akron (Ohio) Museum of Art, and the William King Art Center in Abington, Virginia. His published works include “Landscapes of the Mind: Psychic Space and Narrative Specificity” in Space, Site, Intervention: Situating Installation Art from the University of Minnesota Press.

Coleman has received many awards and honors, including grants from the Ohio Arts Council, the National Endowment for the Arts, ART MATTERS, and the Russell Foundation. In 1997, he was named Outstanding Alumnus of the Year by the Otis Institute of Art and Design. In 2003, he received the Cleveland Arts Prize for Visual Arts.

Coleman lives in Oberlin, Ohio and is married to Annette Macios. They have two children.

See how Johnny Coleman is related to other HistoryMakers
Click Here To Explore The Archive Today!