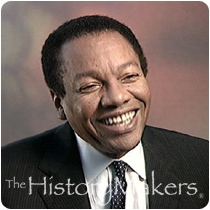 See how Johnathan Rodgers is related to other HistoryMakers

Johnathan Arlin Rodgers was born on January 18, 1946 in San Antonio, Texas. His mother was a homemaker and his father was a soldier in the United States Air Force. As a “military brat,” Rodgers lived in a number of countries and states. He graduated from Rantoul High School in Rantoul, Illinois in 1963. While at Rantoul, he worked on the school paper and was a member of the wrestling team.

In 1967, Rodgers received his bachelor’s of arts degree in journalistic studies from the University of California - Berkeley. While studying at Berkeley, he was sports editor of the campus newspaper, a member of the football team and pledged to the Alpha Phi Alpha Fraternity.

From 1967 until 1968, Rodgers worked at Sports Illustrated Magazine. He was the first African American journalist hired by the publication. His beat included track and field and college basketball. His article, “The Plight of the Black Athlete,” highlighted the struggles African American athletes encountered in both the college and professional arenas. From 1968 until 1969, Rodgers served as the editor of urban affairs for Newsweek Magazine.

In 1969, Rodgers was drafted in the United States Army and served at Fort Jackson, South Carolina until 1971. In 1973, he earned his master’s degree in communications from Stanford University, and then worked as a writer / producer for WNBC in New York. In 1974, Rodgers was hired as a general assignment reporter for WKYC-TV in Cleveland, Ohio, and the following year he transitioned from on-air personality to management when he accepted the assistant news director’s position at WBBM-TV in Chicago. This began a successful career at CBS, where he would serve as news director, general manager, executive producer for CBS News and the president of the network’s television station division. In 1998, Rodgers left CBS and was hired by Discovery Networks. During his six years at Discovery, the network increased viewers by the millions and added nearly a dozen new stations. His responsibilities included all aspects of domestic television, programming, affiliate sales, advertising sales, marketing, research, development and communications.

In 2003, Rodgers was hired as the chief executive officer of TV-One, an entertainment and lifestyle cable television network targeting African American viewers. It is owned by Radio One and Comcast Cable.

Rodgers was interviewed by The HistoryMakers on September 24, 2004.

See how Johnathan Rodgers is related to other HistoryMakers
Click Here To Explore The Archive Today!