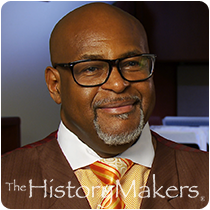 See how John X. Miller is related to other HistoryMakers

Journalist John Xavier Miller, Jr. was born on September 11, 1955 in Henderson, North Carolina to John Miller, Sr. and Betty Faison. Miller was raised in Winston-Salem, North Carolina, where he graduated from R.J. Reynolds High School in 1973. He went on to receive his B.A. degree in journalism from Washington and Lee University in 1977.

Miller began his career with an internship at the Twin City Sentinel in the 1970s. From 1978 to 1982, he worked as a copy editor for The Roanoke Times & World News and as a sports copy editor for the Charlotte Observer. Miller then became an original staff member of USA Today when he was hired as the newspaper’s sports copy desk chief in 1982. In 1991, he was named executive editor of The Reporter in Lansdale, Pennsylvania. In 1996, he was appointed as the managing editor of The Sun News in Myrtle Beach, South Carolina. From 1999 to 2007, Miller worked at the Detroit Free Press and the Detroit Media Partnership (DMP), first as the Free Press’ public editor, then as the DMP’s director of community affairs.

In December of 2007, Miller was named chief executive officer of The Heat and Warmth Fund, a Detroit, Michigan-based nonprofit organization. Three years later, in 2010, he moved to the Hickory Daily Record, where he served as editor. In August of 2013, Miller became the first African American managing editor of the Winston-Salem Journal.

Miller has served on numerous boards including the Maynard Institute for Journalism Education, the Pew Center for Civic Journalism, the Michigan Humanities Council, and various American Society of News Editors and Associated Press Media Editors boards and committees. He was a founding member of the National Association of Minority Media Executives and former board chairman of ARISE Detroit!. He has been a Pulitzer Prize Juror, a facilitator at the American Press Institute in Reston, Virginia, and was the first Donald W. Reynolds Distinguished Visiting Professor of Journalism at Washington and Lee University in 2005. Miller received the Order of the Arrow Vigil Honor from the Boy Scouts of America (BSA) in 1973 and the Spark Plug Award from the Chicora District BSA in 1997.

John X. Miller was interviewed by The HistoryMakers on August 13, 2014.

See how John X. Miller is related to other HistoryMakers