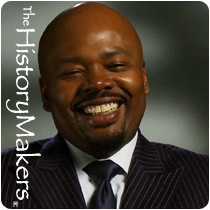 Author and newspaper columnist John W. Fountain was born in Chicago, Illinois on September 29, 1960 to Gwendolyn Hagler and John Wesley Fountain. Fountain graduated from Chicago’s Providence-St. Mel High School in 1978. After attending the University of Illinois at Urbana-Champaign for a year, he enrolled at Wilbur Wright College in Chicago in January 1983. After earning his Associate’s degree, Fountain re-enrolled at the University of Illinois at Urbana-Champaign in 1984, where he graduated with his B.S. and M.S. degrees in journalism in 1987 and 1989, respectively. Fountain was hired as a staff writer at the Chicago Tribune after college.

In 1995, Fountain was hired as a general assignment reporter for the Washington Post, where he worked for five years. From 2000 to 2003, he served as a national correspondent for The New York Times. He left full-time newspaper journalism in 2003 to serve as a visiting scholar at Northwestern University’s Medill School of Journalism. A year later, Fountain was hired as a full professor with tenure at the University of Illinois at Urbana-Champaign, his alma mater. He taught introductory and advanced journalism classes for the university before being hired at Roosevelt University in Chicago as a tenured full professor. Fountain was asked to write a weekly column for the Chicago Sun-Times in 2010. PublicAffairs Books published Fountain’s critically acclaimed memoir True Vine: A Young Black Man's Journey of Faith, Hope, and Clarity in 2003. He also published a collection of essays titled, Dear Dad: Reflections on Fatherhood through WestSide Press, a publishing company he started in 2009.

Fountain has won numerous honors for feature writing from the National Association of Black Journalists, the Associated Press, the American Association of University Women, and the Society of Professional Journalists. In 2001, he received the New York Times Publisher’s Award for his coverage of the Mississippi River Flood. In 2003, while a national correspondent for The New York Times, he was a finalist in features and sports writing for the Peter Lisagor Award. In 2011, Fountain received the Chicago Headline Club’s prestigious Peter Lisagor Award for Exemplary Journalism for his work as a columnist in the Chicago Sun-Times.


John W. Fountain was interviewed by The HistoryMakers on April 16, 2012.

See how John Wesley Fountain is related to other HistoryMakers
Donate Now
Click Here To Explore The Archive Today!