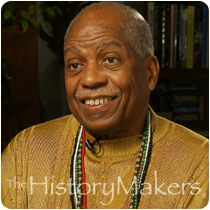 See how John Watson is related to other HistoryMakers
Donate Now

Biochemist and biochemistry professor John A. Watson was born on May 21, 1940 in Chicago, Illinois, the first of eight children. His mother, Catherine P. Berkley-Watson, was a homemaker and his father Hosea Watson, worked as a U.S. Postal Service supervisor. Watson grew up in Chicago’s south side, attending Oakland Public Elementary School and graduating from Parker High School in 1957. After studying at the University of Illinois Navy Pier, he was hired by the American Institute of Baking, where he worked as a research assistant in nutrition research. It was there that his interest in biochemical studies truly crystallized. Watson returned to college to receive his B.A. degree in biology with an option in biochemistry from Illinois Institute of Technology in 1964. After receiving a pre-doctoral USPH Fellowship from the University of Illinois, Chicago Medical Center, Watson earned his Ph.D. degree in biochemistry from the University of Illinois at Chicago in 1967. With a post-Doctoral USPH Fellowship, Watson continued his two-year postdoctoral training at Brandeis University.

In 1969, Watson was hired by the University of California, San Francisco as an Assistant Professor of Biochemistry and Biophysics and Medical school Assistant Dean for Student Affairs. Watson’s research focused on the regulation of metabolic pathways, particularly on the regulation of cholesterol and isopentenoid biosynthesis. He demonstrated that the apparent lack of control of cholesterol synthesis is not a marker for cancer cells, that essential non-sterol isopentenoid synthesis is a post-transcriptionally regulated process, and that excess mevalonic acid production in fruit fly cells is shunted through a novel degradation pathway. Watson became a full Professor of Biochemistry in 1984 and Professor Emeritus of the University of California, San Francisco in 2001.

John Watson is married to Valerie M. Watson, and they are the parents of four adult children: Lisa, Susan, Katherine, and John.

John Watson was interviewed by The HistoryMakers on March 7, 2011.

See how John Watson is related to other HistoryMakers
Donate Now
Click Here To Explore The Archive Today!