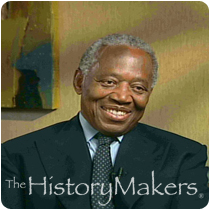 See how John W. Barfield, Sr. is related to other HistoryMakers

Maintenance company chief executive, entrepreneur and businessman John W. Barfield was born Johnny Williams Barfield on February 8, 1927 in Tuscaloosa, Alabama to Lena James Barfield and Edgar Barfield, both of whom worked as field hands. His father also worked in the coal mines and moved north in search of work. In 1932, when Barfield’s father had earned enough money to send for his family, they joined him in Washington, Pennsylvania. While living in Washington, Barfield began his first job, selling dry soap on commission for a white shop owner.

At the age of fifteen, Barfield relocated with his family to Ypsilanti, Michigan, where his father began working in a bomber plant in Willow Run. In 1945, Barfield dropped out of Ypsilanti Public High School and enlisted in the United States Army, serving two years in France and Germany. Upon his return, Barfield began working as a custodian for the University of Michigan, and, in 1949, he married Betty Williams Barfield. With his wife, Barfield cleaned newly constructed houses for additional income.

Barfield quit his job with the University of Michigan in 1955 because his cleaning job after hours had become more lucrative than his full-time one. He began his first company, a contract cleaning group called the Barfield Cleaning Company of Ypsilanti, Michigan, which employed 200 people. Barfield cleaned businesses at night and promoted his business during the day, always sure to wear a shirt and tie. The same year, Barfield also wrote the Barfield Method of Building Maintenance, which would set a standard for the commercial building maintenance industry. In 1969, Barfield Cleaning Company was acquired by the International Telephone and Telegraph Company in one of the highest multiples ever paid for a commercial cleaning company. Barfield and his wife continued working for the company for three additional years. Then, Barfield reentered the maintenance business when he incorporated the Barfield Building Maintenance Company and began promoting his business to different building managers. Also in 1974, when General Motors Corporation was unable to find minority and female suppliers, Barfield incorporated John Barfield and Associates, an organization that provided staffing services to General Motors, broadening its reach to include such companies as the Ford Motor Company, DaimlerChrysler and Blue Cross Blue Shield of Michigan.

In 1978, General Motors requested that he manufacture transmission pins for them, and soon thereafter, Barfield founded the Barfield Manufacturing Company. In 1981, Barfield turned John Barfield and Associates over to his son, Jon. Three years later, the company was renamed The Bartech Group. The following year, Bartech would be named 1985 “Company of the Year” by Black Enterprise Magazine. In 1986, the Barfield Building Maintenance Company was acquired by Unified Building Maintenance Services, Inc., and in 1991, Barfield Manufacturing was purchased by Mascotech Industries, an automotive supplier. The following year, Barfield began his Share Products initiative, established to bring attention to the issue of homelessness in the United States. Barfield was a recipient of the The George Romney Award in 1996, recognizing lifelong achievement in volunteerism.

Barfield and his wife had six children and resided in Ann Arbor, Michigan.

John W. Barfield was interviewed by The HistoryMakers on June 28, 2007.

See how John W. Barfield, Sr. is related to other HistoryMakers
Click Here To Explore The Archive Today!