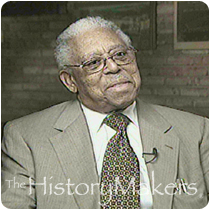 See how John S. Chase is related to other HistoryMakers

Architect John Saunders Chase was born January 23, 1925, in Annapolis, Maryland. When his parents, Viola Hall Chase, a teacher and cook, and John S. Chase, Sr., a school principal and postal worker, separated, Chase was raised primarily by his mother. Every year at the United States Naval Academy graduation, Chase could earn $25 for each tossed hat he retrieved. At Bates High School, his teacher, Mr. Marchand, introduced Chase to architecture; he earned his B.S. degree from Hampton University in 1948, and became the first African American to enroll in and graduate from the University of Texas at Austin School of Architecture in 1952.

Chase became the first African American licensed to practice architecture in the state of Texas, and later was the first African American to be admitted to the Texas Society of Architects, and the Houston Chapter of the American Institute of Architects (AIA). Chase co-founded the National Organization of Minority Architects (NOMA) along with 12 other black architects at the AIA convention in Detroit in 1971. When President Jimmy Carter selected him in 1980, Chase became the first African American to serve on the United States Commission on Fine Arts. Projects designed by Chase’s firm include: the George R. Brown Convention Center, the Washington Technical Institute, Links, Inc., National Headquarters, Delta Sigma Theta National Headquarters, the Harris County Astrodome Renovation, the Thurgood Marshall School of Law, and the Martin Luther King, Jr. School of Humanities at Texas Southern University. Chase was later awarded a commission to design the United States Embassy in Tunis, Tunisia; a fifty million dollar complex.

Chase was elected to the AIA College of Fellows, was awarded the AIA Whitney M. Young Citation, and was the recipient of the NOMA Design for Excellence Award for four consecutive years. Chase also received the commendation for Meritorious Service by the Houston Independent School District, and the Honor Award for Architectural Excellence in School Design by the Texas Association of School Boards for his design of the Booker T. Washington High School. Chase and his wife, Drucie, raised three children together: John, Anthony and Saundria.

See how John S. Chase is related to other HistoryMakers
Click Here To Explore The Archive Today!