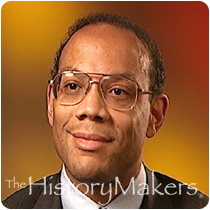 See how John Rogers, Jr. is related to other HistoryMakers
Donate Now

Investment chief executive John W. Rogers, Jr. was born on March 31, 1958 in Chicago, Illinois to Jewel Lafontant Mankarious and Judge John Rogers, Sr. At an early age, he showed great aptitude in school as well as on the basketball court, and, because of his father, developed an interest in the stock market. Rogers graduated from the University of Chicago Laboratory School in 1976. He went on to Princeton University, where he served as captain of the varsity basketball team and graduated in 1980 with his A.B. degree in economics.

Rogers has served on the board of directors of Aon Corporation, Bank One Corporation, Burrell Communications Group, GATX Corporation, Exelon Corporation and McDonald's Corporation. He also has been active within the community, serving as chairman of the Chicago Urban League, board member of the Chicago Symphony Orchestra, the John S. and James L. Knight Foundation, the National Association of Basketball Coaches Foundations, the Investment Company Institute and the University of Chicago. He served as a member of the American Academy of Arts and Sciences, and a director of the Robert F. Kennedy Center for Justice and Human Rights. In addition, Rogers served a six-year term as the first African American chairman of the Chicago Park District, was co-chair for President Barack Obama’s Presidential Inaugural Committee 2009, and chaired the President’s Advisory Council on Financial Capability for Young Americans.

In 1994, Time magazine voted Rogers one of the "Fifty For the Future" based upon the unprecedented success of Ariel Investments. In 2008, he was awarded Princeton University’s highest honor, the Woodrow Wilson Award. In 2013, he was featured alongside Warren Buffett, Sir John Templeton and Benjamin Graham in the book: The World’s 99 Greatest Investors by Magnus Angenfelt. In 2010, his life was honored by The HistoryMakers as part of the PBS-TV interview and taping of A Night With John Rogers.

John Rogers, Jr. was interviewed by The HistoryMakers on July 17, 2002.

See how John Rogers, Jr. is related to other HistoryMakers
Donate Now
Click Here To Explore The Archive Today!