Information about John A. Peoples, Jr. 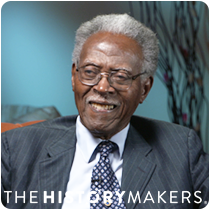 See how John A. Peoples, Jr. is related to other HistoryMakers

Academic administrator John A. Peoples, Jr. was born on August 26, 1926 in Starkville, Mississippi to Maggie Peoples and John A. Peoples, Sr. He graduated from Oktibbeha County Training School in 1944, and enlisted in the U.S. Marine Corps in 1945, serving until 1947. Peoples then attended Jackson State University in Jackson, Mississippi and received his B.S. degree in mathematics in 1950, and his M.A. degree in mathematics in 1951 and his Ph.D. degree in higher education in 1961, both from the University of Chicago in Chicago, Illinois.

From 1951 to 1958, Peoples worked as a math teacher at Froebel School in Gary, Indiana. In 1958, he became the assistant principal of Lincoln School, and went on to assume the role of principal at Banneker School in 1962. In 1964, Peoples joined the faculty at Jackson State University as a professor of mathematics. He also worked as the assistant to the president of the university, Jacob Reddix. From 1965 to 1966, Peoples completed a post-doctorate internship at SUNY Binghamton where he also served as assistant to the president. He was then named vice president of his alma mater Jackson State University in 1966, later serving as president from 1967 to 1984, and where in 1970, two students were killed on campus. During his tenure, Jackson State achieved university status and granted its first doctoral degrees in 1982, becoming the first historically black institution in Mississippi to do so. Peoples resigned as president of Jackson State University in 1984. He then served as a distinguished professor at Jackson State’s Universities Center before retiring in 1985.

Peoples served as director of the American Association of Higher Education from 1971 to 1974, and on the committee of the National Endowment for the Humanities. He also served as the first African American chairman and director of the American Council on Education. In recognition of his leadership endeavors in Jackson, Peoples was elected to the Jackson State University Hall of Fame and the Southwestern Athletic Conference Hall of Fame. In 1993, he was honored with the National Black College Hall of Fame Lifetime Achievement Award.

Peoples and his wife, Mary Galloway Peoples, have two children.

John A. Peoples, Jr. was interviewed by The HistoryMakers on December 17, 2017.

See how John A. Peoples, Jr. is related to other HistoryMakers