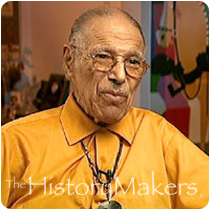 See how John Murphy is related to other HistoryMakers
Donate Now

John Murphy, III was born into a journalistic family legacy. Born in Baltimore, Maryland on March 2, 1916, Murphy was named for his grandfather, the founder of the Afro-American newspaper. Murphy attended Temple University in Philadelphia, earning a B.S. degree in 1937, and he later attended the Press Institute of Columbia University in both 1952 and 1971.

Journalism came naturally to Murphy and the Afro-American was rapidly increasing its circulation along the East Coast when Murphy completed college. Before joining the family business, however, Murphy went to work with the Washington Tribune, where he served as the manager from 1937 until 1961. After serving on the board of directors of the Afro American, Murphy took over as chairman of the board from his cousin, Frances Murphy, II, in 1974. He also served as the business manager and the purchasing agent for the Washington Afro American. Murphy continues to hold the post.

Murphy has remained active throughout his life in a number of organizations, including several churches. He is a member of the Churchman’s Club, is on the standing committee of the Diocese of Maryland and is a vestryman at St. James Episcopal Church. He also serves on the boards of Amalgamated Publishers and the National Newspaper Publishers Association. Murphy is a supporter of the arts and education, serving on the board of the Baltimore School for the Arts and the Baltimore City Literacy Commission.

For his civic and business activities, Murphy has been honored numerous times by various organizations. The City of Baltimore proclaimed him Citizen of the Year in 1977. He has also received the Publisher of the Year Award from the University of Washington, D.C., and the Appreciation Award from the Race Relations Institute of Fisk University. Murphy and his wife, Camay, daughter of Cab Calloway, have two children.

See how John Murphy is related to other HistoryMakers
Donate Now
Click Here To Explore The Archive Today!