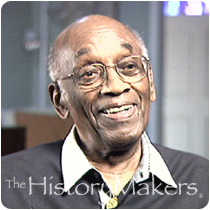 See how John Levy is related to other HistoryMakers

Renowned music manager John Levy was born in New Orleans, Louisiana, on April 11, 1912. His mother was a midwife and nurse and his father was an engine stoker on the railroad. At the age of six, the Levy family moved to Chicago, and as he went through school, a teacher encouraged him to find a stable job at the post office.

Levy, however, had dreams of music, and by 1944 he was in New York playing bass for the Stuff Smith Trio at the Onyx Club. Over the next few years, Levy played with a number of other jazz notables, including Ben Webster, Errol Garner and Milt Jackson, as well as with Billie Holiday at her comeback performance at Carnegie Hall in 1948. In 1949, Levy joined the George Shearing Quartet, and as they toured the country he took on the role of road manager. In 1951, he put performing aside and became a full-time manager for the group, becoming the first African American to work as a personal manager in the pop and jazz music industry. Over the ensuing years, he represented a number of other jazz stars, including Nat and Cannonball Adderley, Nancy Wilson, Ramsey Lewis, Herbie Hancock, Roberta Flack and Wes Montgomery to name just a few.

Levy is still active as a manager after more than fifty years in the business. He has also recently written a book on his experiences in the record industry entitled Men, Women and Girl Singers: My Life as a Musician Turned Talent Manager. Former Los Angeles mayor Tom Bradley honored him by proclaiming a John Levy Day, and in 1997 he was inducted into the International Jazz Hall of Fame.

See how John Levy is related to other HistoryMakers
Click Here To Explore The Archive Today!