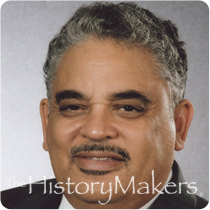 See how John J. Johnson is related to other HistoryMakers
Donate Now

John J. Johnson was born on February 10, 1945, in Louisville, Kentucky. Johnson can trace his family history back to his maternal great-great grandparents, Prince Martin (1826-1908) and Evelyn Martin (1819-1908) and his paternal great grandparents, Alexander and Hester Johnson. Johnson grew up in Franklin, Kentucky where he experienced segregation and racism. While in high school, Johnson was involved in the National Association for the Advancement of Colored People (NAACP) Youth Council and as a member of student government. At the age of seventeen, he became the youngest president of any Kentucky chapter of the NAACP.

Johnson worked in a factory after his high school graduation. He then worked for the Kentucky Institute for Community Development as coordinator of training services. In, 1969, Johnson accepted a position as director of operations for a national marketing and research firm based in New York. He returned to Kentucky and worked with several War on Poverty programs before assuming the position as associate director of the Louisville and Jefferson County Human Relations Commission. Johnson was later appointed director of community services for the Kentucky Commission on Human Rights. In 1984, he became the director of the Louisville and Jefferson County Community Action Agency until he joined the staff of the NAACP in Baltimore. While in Baltimore, Johnson received his B.S. degree from Sojourner-Douglass College in community development and public administration.

Johnson held the position of Chief Programs Officer for many years while working for the NAACP; he also directed a wide variety of programs, including Armed Services and Veterans Affairs; Voter Empowerment; Economic Outreach; Labor, Academic, Cultural, Technological and Scientific Olympics; the Prison Project; and the NAACP library. Johnson also worked internationally, including organizing a trip to East Germany in 1992 where he led the NAACP delegation to witness hearings on alleged discrimination against African American military workers. In 1999, Johnson returned to Germany at the United States Army’s behest to be a part of the ceremony for the 70th anniversary of Martin Luther King, Jr.’s, birthday. As part of the Freedom House Citizens Exchange Program, Johnson spent two weeks visiting East Africa to help promote global democracy. In 2002, during Zimbabwe’s Presidential Election, Johnson’s NAACP delegation was the only American organization invited to work as independent observers. Johnson eventually became the NAACP’s chief executive of operations, where he oversaw the executive office of the President and CEO.

Johnson spent a lifetime volunteering for worthy causes, but his volunteer and civic work has been faced with many challenges, from integrating the segregated swimming pool in his hometown of Franklin, to challenging issues such as divestment of Kentucky’s interest in South Africa. Johnson served as the Kentucky president of the NAACP for fourteen years, increasing Kentucky NAACP branches from four to forty-two. Johnson served as an elected member of the NAACP’s national Board of Directors where he was elected one of its vice presidents. Johnson served as chair of the Kentucky Coalition of Conscience; served as a member of the Urban League; and participated in the Kentucky chapter of the National Association of Human Rights Workers and Southern Christian Leadership Conference (SCLC). Johnson also moderated a weekly radio program entitled Louisville Forum and wrote a column in the weekly newspaper, The Louisville Defender, entitled Advocacy Line. Johnson’s work in civil and human rights led to a street being named after him, John J. Johnson Avenue, in his hometown in 1993.

See how John J. Johnson is related to other HistoryMakers
Donate Now
Click Here To Explore The Archive Today!